Pankaj Singh and Ravindra Jadeja were the wicket-takers for the Indians.

Hosts Derbyshire got off to a good start in the first session of Day One of the tour match against the Indians. Derbyshire got to 79 for two after 25.4 overs. The only success tasted by India was thanks to Pankaj Singh, who continued to impress with his pace and bounce. Along with Bhuvneshwar Kumar, he was the best bowler on display.

Derbyshire opened with the pair of Ben Slater and Paul Borrington. It was a sedate start to the innings by the pair, as they added just nine runs in over five overs before Borrington succumbed to Pankaj, caught by Ajinkya Rahane. Borrington’s 17-ball innings yielded him no runs at all, as the prospects looked bleak for the hosts.

However, new man Chesney Hughes and Slater steadied the ship, and kept accumulating runs in ones and twos. With the advent of the wayward Varun Aaron and Ishant Sharma, however, the two were able to pick up a few boundaries to boost the run rate. Aaron came back well in his later overs, but Ishant continued to take a pounding, going at five runs per over at a time when the next most expensive bowler had an economy rate of 2.67.

It was Ravindra Jadeja, bowling the 26th over, who finally broke the partnership. Hughes, after looking very solid, was bowled for 23 off 60 balls. Jadeja had struck in his very first over, and with it we go to the Lunch break.

Catch the live scores and updates of the match here 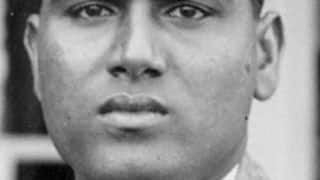