The bowlers did not impress in the two tour matches against Leicestershire and Derbyshire.

India captain MS Dhoni will have to put in some serious thinking in the next four days as to what exactly will be his team’s bowling combination in the first Test against England at Trent Bridge, starting July 9, 2014. The Indian attack led by the erratic Ishant Sharma gave away 831 runs in 197 overs with only 11 wickets to show for their efforts in the two tour games against the lowly-placed Leicestershire and Derbyshire.

Ishant himself had bowled as many as 18 no-balls in the three innings that he got to bowl. The figures won’t amuse Dhoni, who has had to fret a lot in order to get his bowling combination right in Test matches as the Indian team has traditionally played with four specialist bowlers.

While little known Leicestershire batsmen Angus Robson and Greg Smith helped themselves to stroke-filled centuries, Indians were able to register a five-wicket win against Derbyshire. But one can’t take it seriously since the visitors were playing all 18 members of their squad and the action in the middle was rarely intense.

For the Indian team, the two warm-up games were a mixed bag. Their main focus was to give a run-in to all players in the touring party since the five-Test series is a back-to-back affair. In that endeavour they were successful, as some players got a little more playing time than others. It was perhaps a pointer to the team selection for the first Test, if not more.

The batsmen gave a good account of themselves, fighting hard under cloudy skies at Leicester and then settling in at the placid square in Derby. The No 7 spot holds the key to the final XI for the Nottingham Test and much will depend on the conditions once the team management gets there and assesses the pitch.

Earlier in the week, cricketer-turned-commentator Ravi Shastri turned up the heat during the Test-series launch in London, egging the Indian bowlers to put pressure on captain Alastair Cook.

“If you have the leader under pressure always go for him. You need to get stuck in. You have to make the game as tough as you can. As an India player they will want this debate to continue,” he had said.

The worrying factor is that there have been serious doubts whether this bowling unit is capable of getting 20 wickets but that is the aim with which they will start their fight to regain the Pataudi Trophy.

If you have the leader under pressure always go for him. You need to get stuck in. You have to make the game as tough as you can

Veteran pacer Zaheer Khan‘s absence is also a cause of concern for the Indians as they lack a leader of sorts in their attack. In his absence Ishant is expected to be the leader of the attack. He is the only bowler with experience of Test cricket in English conditions and so far has played 55 Tests in his six and half years of international career.

His individual tally is more than four times that of other medium-pacers in the squad put together — Bhuvneshwar Kumar (six Tests), Mohammed Shami (six Tests), Varun Aaron (one Test), Ishwar Pandey and Pankaj Singh who are yet to make their debuts.

Needless to say there is too much responsibility and pressure on Ishant’s shoulders. And he didn’t enjoy the best of starts to this tour, completely off-the-mark in Leicester and bowling listlessly in the first innings at Derby. In these two innings, he bowled 21 overs conceding 113 runs, with only two wickets to his name, including 18 no-balls.

He struggled to gain any rhythm and mixed up his run-up so much so that the umpires in Derby stopped calling his no-balls at one point. In the second innings there, he returned to bowl a decent seven-over spell (none for 10) with only two no-balls.

In three innings then, Ishant bowled 28 overs. No other medium-pacer sent down more overs than him. Together all the pacers managed to take seven wickets against the two county sides’ secondary batting line-ups.

It doesn’t make an all too happy reading and Dhoni will certainly be pondering as to who will be his men to make the best use of the ‘Red Duke’ in what can turn out to be an eventful English summer. 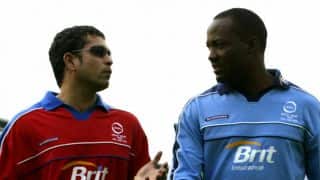