With two defeats in two matches , there can be no doubt that India's World Cup preparation has gone awry.

It was meant to be a dress rehearsal for the ICC World Cup 2015 next month but the Indian cricket team has been left grappling with selection issues in the ongoing tri-series against Australia and England, failing to find the combination that would be good enough for the marquee event.

With two defeats in two matches against Australia and England respectively, there can be no doubt that India’s World Cup preparation has gone awry. This tri-series was meant to be a dress rehearsal for their title defence over the next two months, but there is a good chance now that India might not even make it to the tri-series final in Perth on February 1.

Ever since the two new balls rule came into effect, skipper Mahendra Singh Dhoni has shied away from playing seven batsmen in the eleven. The onus has been to rely on five full-time bowlers and his dependency on the part-timers has waned.

Slowly, but steadily, India have become a side that always plays six front-line batsmen in ODIs, irrespective of conditions.It has put focus on Dhoni’s finishing abilities at number six and heaped pressure on Suresh Raina’s role at number five. To hedge their bets in the middle order, make the batting line-up seem stronger, now Virat Kohli bats at number four and not number three, a position where he has scored 14 of his 21 ODI hundreds.The top-order responsibilities are given to Shikhar Dhawan, Rohit Sharma and Ajinkya Rahane, with only one out of three showing any semblance of form so far.

Ravindra Jadeja’s absence has hurt India a lot. Over the last couple years the team management has groomed him to take up the number seven role.

With R Ashwin and Bhuvneshwar Kumar to follow, the lower order is able to contribute quite a bit. But the Saurashtra all-rounder is only making his way back to full fitness and as such the young Axar Patel has been tried out in his place.

“We all know that Ashwin and Kumar can definitely bat, but they will not clear big grounds easily. Once I go in to bat at number six, I have to balance between hitting out and not getting out, and it is a difficult thing to do,” Dhoni has stated.

“So we have to wait for Jadeja to return because he can do that hitting role at number seven. In the meantime, Axar we all know can bat, and he needs to use these opportunities.

Tomorrow he can be groomed into the Jadeja role too,” said Dhoni after the Melbourne ODI.

With two ducks in two matches, he is finding out the difference between batting in IPL and batting in Australia the tough way. Time is running out while he is still finding his feet as there is no news on Jadeja’s fitness as yet.

It has brought the number-seven role under some spotlight ahead of the World Cup. The inclusion of Stuart Binny in the 15-man squad was much debated upon, but it now seems that the team management had a clear idea of what they were doing.

And that is why he was immediately tried out in Brisbane, after just one loss, to get a firm understanding of the role he can play.

“Depending on a few venues in the World Cup, Perth and in New Zealand, it is important that we have a seaming all-rounder in the side. There’s not much purchase for the spinners there. And that’s one area where Binny may come in.

Irrespective of all the debate, the best seaming all-rounder of India has been picked in the side,” says Dhoni.

“So we are hoping that he will stand up and take the responsibility. He is exciting you know. He can play aggressive shots if needed. And he’s a good bowler. If he gives me 6-8 overs, that’s enough. I can use the other part-timers to bowl those 2-3 overs that are needed.”.

Despite the big nine-wicket loss at the Gabba then, it worked out quite well for India from the experimentation point of view at least. Binny held the innings together after the top-order collapsed and then hit a couple of lusty blows in his knock of 44 runs. He was even handed the new-ball as Dhoni wanted to test his time-management skills while playing four medium-pacers.

While the Binny experiment worked out to a certain extent, it remains to be seen when the top-order comes good.

For only then will India be able to test the hitting-strength on these big Australian grounds.

With only two assured competitive matches remaining at this stage before the World Cup, time is running out for this batting order to go ballistic.

“It has been difficult to have a realistic reflection. We have really not been in a situation where we have wickets in hand in the last 10-12 overs. It is difficult to say whether we can or cannot but certainly the grounds and outfields are pretty big,” Dhoni had said in Brisbane. 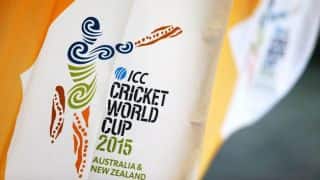