According to Richards, the West Indian batting can pressurize the Indian attack.

Perth: West Indies cricket legend Viv Richards on Thursday said that the Indian bowling is not consistent enough and sooner or later it will be exploited by opposition batsmen. In a column for the International Cricket Council (ICC) website, Richards said that even though India are a force to reckon with at this point of time, they have an inconsistent bowling line-up which will be exposed. Live Updates: India vs West Indies

“India is a powerful force at this point in time with three wins out of three matches. Its batting is always its strong point and it is looking good. Bowling is looking good too, as good as anything we have seen so far from them on this long tour,” wrote Richards.

“But even then, it is not consistent enough and sooner or later that factor will come to play. That is an open chance for any opposition team to pounce on.” ICC Cricket World Cup 2015: POINTS TABLE

The two-time World Cup-winner said the West Indies batting order is capable enough of launching an attack on the Indian bowlers when they meet in a World Cup Pool B match on Friday at the WACA.

“The West Indies’ batting order is talented enough to take a chance against such a traditionally inconsistent India bowling attack. While India is comfortably placed in Pool B, West Indies has to make up points for qualification to the next round,“ he said. ICC Cricket World Cup 2015: SCHEDULE & MATCH DETAILS

The 62-year-old added that winning the game against the defending champions will do West Indies a world of good. “However, this is not a must-win game by any means. I don’t want them to think like that because it will only put undue pressure. If they think so, they will lose shape,” said the former right-handed batsman.

“Instead, they should just go about their business like they would in any normal match, as professionals, and that will help them achieve what they want to. If they can make it happen, it will be very good for their confidence. ICC Cricket World Cup 2015: Complete Coverage 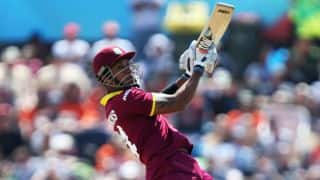