India's lack of fight is surprising after historic victory at Lord's

India's lack of fight is surprising after historic victory at Lord's

Following the historic win at Lord's, India's performances in England have been mediocre.

As India surrendered the fourth Test at Manchester by an innings and 54 runs in less than three days, the five-match series shifted decisively in England’s favour. But the manner of defeats has definitely shocked everyone after the India’s historic Lord’s victory. It is now pegged at 2-1, after the hosts had won dominantly by 266 runs in the third Test at Southampton.

However, there is a staggering difference in the manner in which India were beaten in these two Tests. The home team were rallied by the support they received at the Ageas Bowl and the visitors were under pressure from the moment Ravindra Jadeja dropped Alastair Cook on Day One. England scripted a perfect Test win there and at times those cannot be grudged. At Old Trafford though, it was India’s own undoing as they showed a shocking lack of grit and determination to stake out at the crease for 61 overs.

Three hours after they collapsed in hapless fashion, rain arrived in Manchester. It didn’t stop pouring for the next 16 hours which would have meant that Sunday’s play would have been washed out. The forecast for Monday isn’t good either. But none of it matters now, except the score-line that reads 2-1 with the fifth and final Test starting at the Oval on August 15.

“Given the forecast for next two days, India’s display can only be described as pathetic,” said former England captain Michael Vaughan, talking to BBC’s Test Match Special (TMS), after India were shot out for just 161 runs in their second innings. “It was the best day for batting and England didn’t have Stuart Broad, they only had four bowlers. It was the best day for batting and there was no movement through the air. There was a hint of spin but not a great deal,” said Vaughan.

Indian skipper MS Dhoni is not a believer in the past or the future, and so the forecast didn’t matter to him, as he declared emphatically in the post-match press conferences. Even so, it was a matter of just 61 overs. The Indian team, having batted only 46.4 overs in the first innings, lowered their standard further in the second innings, lasting only 43 overs. Young batsmen sure, but it was simple ineptitude, to grind the opposition down, that was on display.

It becomes more glaring when Broad’s absence is considered. It is compounded by the fact that James Anderson turned up ill on this third day’s play and had to see the doctor before he came on to the field. He bowled only nine overs but did enough damage to first get Gautam Gambhir and then Virat Kohli, the latter for a fourth time this series.

“It will be really disappointing for the Indian fans because this is a young team. But you have got to fight and show that little bit of character. And they just lost the heart for it after Gambhir got out. It looked to me as if they dangled a white towel and that’s not acceptable for an international sports team,” said Vaughan on TMS, not mincing his words.

His words do ring out true. Except Murali Vijay, none of the top-order batsmen can say that they got out to good deliveries. Maybe Cheteshwar Pujara has a cause for complaint, because he got a wrong leg-before decision. But this is hardly the time for a DRS debate especially when the batsman has been looking a shadow of himself, never really settling down or indeed making good on his starts previously in this series.

Apart from them, none of the other batsmen showed enough fortitude to stay at the crease, not for 61 overs and certainly not for two days. Gautam Gambhir could have ducked the short-ball, instead of trying to glide it to fine leg and only ending up gloving it to the keeper. Kohli has been simply found out by Anderson outside the off-stump and on current evidence the batsman has done little over the course of this tour to get over this short-coming.

The most staggering dismissals were those of Ajinkya Rahane and Dhoni himself. The latter played a stellar 71-run knock in the first innings and for a second-time in the match he was set. Yet he decided to throw it away in the guise of attacking Moeen Ali. India have always looked to attack part-timer spinners, home or away. And surely they must sort out their strategy against Ali at some point. But when you are fighting to save the Test, the attacking option goes out of the window.

Meanwhile, Rahane played two poor strokes in both innings in this match. In the first, he weathered the initial storm of the first hour that saw India reduced to eight for four and got set. Then he went for a drive that was non-existent. In the second, he perished playing a needless stroke to Ali, perhaps down again to the strategy of attacking him. It has been a big climb-down from the heroic effort Rahane produced at Lord’s.

In fact the same can be said of the entire eleven. This is not the Indian team that won that second Test by 95 runs, and for good reason. “If you look back at what has happened since Lord’s, India have been fighting too many battles off the pitch involving a lot of lawyers and trials. It is bound to be a distraction.

“But if you are still going to fight battles off the pitch, then you must remember to fight on the pitch. And that?s the most important aspect of playing cricket. That fight, that character, that togetherness and I have not seen any of that from India over the last two Tests,” Vaughan had said.

Dhoni took the lead in that Jadeja-Anderson affair, but he went missing on Day Three of this fourth Test from the very first ball. Uninspiring bowling changes, poor field placements to tail-enders and overall shoddy decisions (similar to that dropping of the fifth bowler in Southampton) made sure that shoulders drooped long before the batsmen padded up in the second innings.

A lead that could have been contained anywhere between 100-150 runs was allowed to build up to 215. There is a lot of introspection to be done in the Indian dressing room for winning just one session in two consecutive Test matches. And there is a very short turn-around time to the next Test at the Oval. Maybe they can use these extra two days in Manchester, regrouping in their hotel rooms, as it will most probably be raining outside. 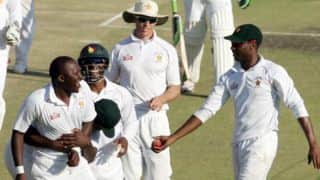