India's team will be led by Suresh Raina and features three debutantes.

Bangladesh skipper Mushfiqur Rahim has expressed disappointment over India’s decision to send a weakened squad for the three one-dayers but added the move will act as extra motivation for the hosts.

After a marathon meeting of the selection panel in Mumbai, the BCCI named a 15-member team under Suresh Raina for the ODIs starting June 15. The squad is without eight of its regular players including MS Dhoni and Virat Kohli, and this does not amuse Mushfiqur.

“I didn’t expect them to take this series so lightly,” Mushfiqur told reporters in Mirpur. “We have a chance to give a reply on the field. There is extra motivation. They haven’t invited us yet so if we do well in this series, it sends a message,” added the wicketkeeper-batsman.

Mushfiqur is also banking on star all-rounder Shakib Al Hasan, who is part of the Kolkata Knight Riders team in IPL, to provide inputs on the visiting Indian players. “I know most of them and have seen them play, but Shakib has played against all of them, so we will pick his brain. In this day and age, it is hard not to have knowledge on a player,” said Mushfiqur.

India may be hoping that IPL-born players like Pervez Rasool [Sunrisers Hyderabad], Mohit Sharma [Chennai Super Kings], Wriddhiman Saha [Kings XI Punjab] and Akshar Patel [Kings XI Punjab] can make an impact, but Mushfiqur opines that pressure will be on the visitors.

“We have defeated their best team in the past. They have a young team, and despite the standard of the IPL, international cricket is a more difficult stage. And one should not forget that if they lose, India will lose, not India A. The pressure will be on them,” said Mushfiqur.

But facing an inexperienced side may be a double edged sword for the hosts and Mushfiqur said that he will not make the mistake of taking the young Indians lightly. “After seeing their team, I realised that there will more expectations on us. But usually there is more pressure when we play against India, even when they had Dhoni. Everyone wants us to beat them, so pressure was always there. We have to focus on what we are doing, since we have struggled in the last few months. If we can play to our potential, it is not impossible to beat their team,” he said.

The teams are scheduled to play the three ODIs on June 15, 17 and 19 at the Sher-e-Bangla National stadium. 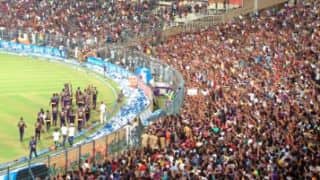 Eden Garden and the relevant Korbo-Lorbo-ness