Adil Rashid and Moeen Ali shared five wickets between them in the fourth ODI between Pakistan and England.

Azhar Ali’s 80 and a late blitz from Imad Wasim ensured Pakistan finish with 223 for 8 in their 50 overs in the fourth One-Day International (ODI) against England at Headingley. Sharjeel Khan and Sami Aslam opened the batting for Pakistan yet again. Sharjeel threw his wicket away in the final ball of the fourth over, despite getting 13 off that over. Chris Jordan, playing his first game of the series, struck early and Pakistan once again failed to get a good first wicket partnership. That brought skipper Azhar Ali to the crease. Jordan and David Willey, entrusted to open the bowling today, bowled extremely well for in the first 10 overs. The average score at Headingley is around 220 and Pakistan will feel that they can put up a good fight in this match, if their bowling is accurate and their fielders are not as sloppy as they have been in the series so far. Full Cricket Scorecard: Pakistan vs England, 4th ODI at Headingley

Pakistan managed to score 45 for the loss of one wicket at the end of the first 10 overs. They needed to up the ante in the next 10-15 overs or so to lay a good platform. England skipper brought on Ben Stokes and Liam Plunkett to bowl in this phase. Plunkett got rid of Sami Aslam for a painful 44-ball 24. He managed to score just one boundary in his innings, which came of the 40th ball he faced. Azhar ensured that he ended the over from Plunkett on a high, hitting him for a couple of boundaries, taking Pakistan to 69 for 2 after 15 overs. Live Cricket Updates, Pakistan Vs England, 4th ODI 2016

Spin was introduced for the first time with the introduction of Adil Rashid in the 18th over of the innings. Azhar had his eye in at this stage. He smashed Liam Plunkett and Moeen Ali for huge sixes off consecutive deliveries to lift Pakistan’s run rate. They had reached 89 for 2 at the end of the 20th over and brought up their 100 in the next over.

Sadly for Pakistan, Babar Azam could not carry on for long, dismissed for 12 off Moeen Ali. He failed to put away a juicy short and wide from Moeen and Plunkett takes a smart catch at backward point. Azhar in the meantime had brought up his ninth fifty off 62 deliveries and looked set to get a big one. He was joined by the busy Sarfraz Ahmed, who scored a spectacular century couple of games back. But he took time to get going. Azhar had also decided to play cautiously as another wicket at this stage would have handed England back the initiative.

Moeen bowled a full toss over Azhar’s head in the beginning of the 29th over. After being called a no-ball, the free hit was smashed by Sarfraz, where Stokes dove to take a stunning catch. Sadly for him and England, that did not count. But Sarfraz did not last long as a diving catch from Plunkett at mid-on saw him dismissed for 12, just before the 30th over. This was Rashid’s first wicket of the match, which saw Mohammad Rizwan walk out to the middle to play his first game of the tour.

Things went from bad to worse as Rizwan headed back to the pavilion, trapped leg before by Rashid for just 6. Pakistan had lost half their side for just 152 in the 34th over of the innings. England were right on top at this point and had a good chance of bowling Pakistan out too. Azhar, though was looking set, but needed someone to stay with him.

But Azhar holed out in the deep for 80 off Rashid with Pakistan in a spot of bother at 169 for 6 with 12 overs to play. Nawaz and Imad Wasim too could not add anything substantial after that as Nawaz was stumped off a beautiful delivery from Moeen, who finished with 2 for 39 in his 10 overs.  Imad was looking in good touch. He got Pakistan those crucial boundaries, that took them past the 200-run mark in the 44th over. He eventually managed to get Pakistan to a decent score. He is yet to be dismissed in the series in this three innings and perhaps could bat higher up the order in the next game. Hasan Ali gave him excellent support and the duo got to their 50-run stand off just 40 balls, which is the highest of the innings. Imad got to yet another fifty, this time off just 32 deliveries. Hasan was dismissed for just nine in the penultimate over, but he had done his job.

Umar Gul showed off his batting skills, smashing Plunkett over his head for a huge six, but Pakistan narrowly fell short of the 250-run mark. Pakistan, bowlers, still will have to be at their best, if they are to restrict England and get off the mark in the series.

Spinners did bulk of the damage for England. Moeen and Rashid picked up five wickets between them, giving away just 86 runs between them. Plunkett turned out to be quiet expensive for England, going at over six an over in an innings, where Pakistan have gone well under five.

England took the Pakistani bowlers apart in the previous match where they scored 444 for 3, which is the highest ODI score ever. The pitch at Headingley looks a bit dry and should assist the bowlers to a certain level. England with an excellent batting line-up, will back themselves to chase this down. England skipper Eoin Morgan is just one run away from completing 5,000 ODI runs and Joe Root looks to be the first English batsman to score six consecutive fifties.

Pakistan had won the toss and elected to bat first. Both England and Pakistan made a few changes to their playing XI. Willey, Jordan and Jonny Bairstow came into the side for Mark Wood, Chros Woakes and Jos Buttler. Pakistan handed an ODI debut to Mohammad Rizwan. They also got it Mohammad Irfan and Umar Gul in place of Mohammad Aamer and Yasir Shah. The experienced Shoaib Malik and Wahab Riaz too do not find a place in the side. England have taken an unassailable 3-0 lead in the five-match series. 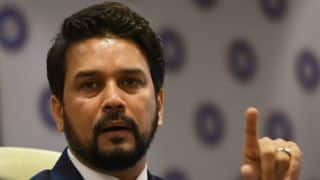