Pakistan's bowler in Imad Wasim, Wahab Riaz and Hasan Ali nabbed up 2 wickets apiece to restrict England to just 135 runs in the one-off T20I at Old Trafford at Manchester.

England ended their final batting display at home this summer on 135 for 7 in their quota of 20 overs. England clashed with Pakistan in their one-off Twenty20 International (T20I) at Old Trafford in Manchester. The second half of the England batting display was all about how Pakistan’s bowlers wrecked havoc on their famed batting line-up. Alex Hales and Jason Roy started off steadily weathering out any danger the Pakistani quick’s had to offer. Hales slowly took off and in no time reached into this 30’s. Hales was in particular heavy on Mohammad Aamer and Sohail Tanvir, picking them up for 31 runs from the 17 balls he faced. Roy on the other hand, was a bit lucky to start off as with a tough but doable catch missing Sarfraz. England with the likes of  Eoin Morgan, Jos Buttler and Ben Stokes in their famed middle-order were restricted to a total of  135 for 7 in 20 overs. Live Cricket Scorecard, Pakistan vs England, One-off T20I at Old Trafford

Pakistan were egged on by their newest find Imad Wasim, who opened the bowling for them. Imad gave away just 2 runs from his first. Imad unluckily got hit on the side of the head in the next over while fielding at point. This meant Imad had to go for a bit of treatment. Aamer and Tanvir who were next change for Pakistan, was taken for runs with their pace helping the bowlers. As soon as Imad came on to the field, he was into the thick of things. Imad snatched up Roy for just 21 runs, after trapping him leg-before. Imad did not stop their getting the massive wicket of Hales for 37 runs. Hales who was looking to play Imad cross batted missed the ball completely and ended up getting bowled. Sarfraz did not stop his best bowler from finishing his quota of 4-overs. Imad ended with figures of 2 for 17, only second best to Shahid Afridi in terms of economy against England.

Debutant Hasan Ali was soon in the action, he too ended up leaving an impression on the match. Hasan picked up the key wicket Joe Root who was just into this innings. Root trying to play the uppercut ends up giving a simple catch at third-man. Everything depended upon Buttler and Morgan. Buttler did not look one bit settled in the middle and tried every shot in the book before handing Wahab Riaz his first wicket of the match. Buttler gave quite a simple catch to the substitute fielder Amad Butt standing at deep point for 16. Next to go was Morgan who in an bid to be super cute gave Sarfraz a neat catch off Riaz. Morgan made just 14 runs.

Hasan continued his good spell picking up the crucial wicket of Stokes. Stokes who was playing his first T20 match post WT20 final looked out of sort. Stokes in an attempt to his Hasan off the park, spooned a simple catch to the fielder standing at square leg-boundary, adding just 4 runs to the teams score. It was only Moeen Ali and David Willey who added some late order runs to near England to a respectable total. Willey in an bid to go big gave Riaz his third wicket.

England after winning the toss, elected to bat first on a flat looking pitch. Morgan chose to go with the same side that fielded in the World T20 final against West Indies in India. Sam Billings, Mark Wood and Sam Billings were left out the side. Meanwhile Pakistan handed Babar Azam and Hasan Ali their maiden T20I cap. This is also the first time a wicketkeeper has captain Pakistan in T20Is. 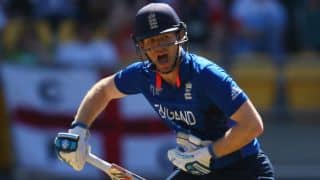 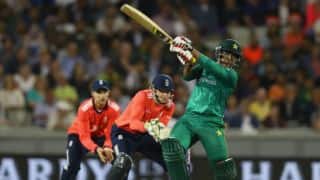