Adam Gilchrist, the Kings XI Punjab skipper, termed this a do-or-die match when assessing his team s chances of staying alive in the competition. "If there is any place to start it will be tonight," he said. And 32.5 overs later, Gilchrist and his team-mates whooped and celebrated after handing Mumbai Indians their heaviest defeat in all IPL games. 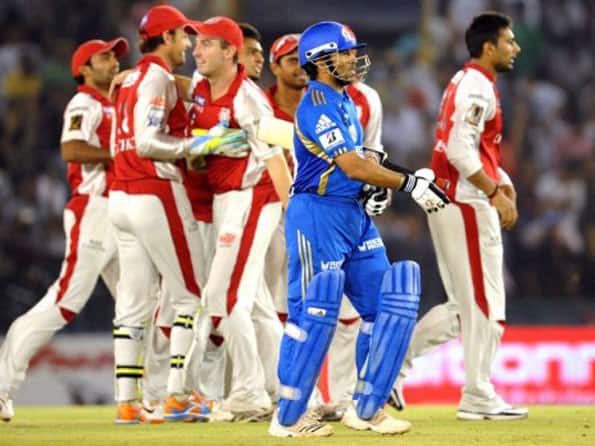 Adam Gilchrist, the Kings XI Punjab skipper, termed this a do-or-die match when assessing his team s chances of staying alive in the competition. “If there is any place to start it will be tonight,” he said. And 32.5 overs later, Gilchrist and his team-mates whooped and celebrated after handing Mumbai Indians their heaviest defeat in all IPL games.

Despite a tigerish fielding performance and five wickets from Munaf Patel, KXIP cobbled together a score of 163 and then it was over to the bowlers who ran through a gung-ho batting line-up to secure a victory that moves them up from last place on the table. At the halfway mark it appeared MI s only blemish was to concede 22 extras, but the approach of some of their batsmen was mindboggling.

KXIP took the field a determined side. Praveen Kumar snared Sachin Tendulkar in a maiden third over, after which Rohit Sharma and Aiden Blizzard were taken down the leg side by Gilchrist in the space of three deliveries. The resolve to win was starkly evident. Fielders dived to cut off runs inside the circle and throws were returned quick and flat from the deep.

This was the first time in the tournament that MI had lost three wickets inside the Powerplay, and the pressure of being in an awkward position told. With the run rate rising, MI s batsmen applied themselves poorly. Ambati Rayudu sold Andrew Symonds down the river, and moments later top-edged the lamest of pulls to be on his way for 13. That became 55 for six when Tirumalasetti Suman swung Ryan Harris off his hips and found long leg.

Not much was expected from Harbhajan Singh, and after a couple lusty hits he charged Bharghav Bhatt and missed completely. Kieron Pollard was the last hope but he threw caution to the wind and fell attempting a big shot, and the last two wickets fell in one over from the Bhat who finished with four for 22. It had been a most stunning comeback from KXIP.

Earlier, Punjab innings had been a mixed bag. The home side had recovered ground strongly after an early blow, but a double-wicket 16th over, bowled by Munaf , snatched the thrust back from Shaun Marsh and, at the halfway mark, it appeared they had made the difference between a big target and an attainable one.

Gilchrist was cracked on the helmet by Lasith Malinga and then let off by Symonds at short extra cover, and proceeded to play a few firm shots as he and Marsh added 70 in just seven overs. However, Gilchrist was unable to really build on the life he had been given. Malinga snared him immediately into his second spell with another short delivery that Gilchrist gloved to Rayudu.

By this time Marsh had cruised to 30 with an array of strokes. His driving was a treat to watch, and Marsh made sure to pick runs off the part-time spin of Rohit and Suman with horizontal-bat shots. He looked to come down the track to the slower bowlers and didn t allow any bowler to settle.

Dinesh Karthik came out played his most attractive innings of the competition. Malinga was punched straight for four, Pollard drive past cover and, after being reprieved by Blizzard in the deep, Karthik collected boundaries off the ineffective Suman.

However, six wickets fell in the final five overs as MI surged back. Munaf struck with the wickets of Marsh and David Hussey in the 16th over and proceeded to grab two more in the 19th. With that MI walked off the field a confident lot, but on resumption of play it was their opponents who played with more passion and conviction.

Man of the Match: Bhargav Bhatt

I walked on to the ground with no-confidence: Ganguly