South Africa s Cameron Delport and West Indies Javon Searles also have been released ahead of the IPL Auction reportedly in the third week of December.

Among the Indian players that KKR let go are Apoorv Wankhede, Vinay Kumar and Ishank Jaggi with the franchise retaining 13 core players.

“The retention was triggered by how our season went in 2018,” Venky Mysore, the CEO of KKR was quoted as saying in a report in Cricbuzz on Thursday.

“As we all know, we had a big auction before the last edition, where we assembled a new team. We had retained only Andre Russell and Sunil Narine (on that occasion), so it was practically a new squad, and we were quite excited by the way the season evolved. We have retained 13 players now, including Kamlesh Nagarkoti. He was injured, and he, unfortunately, couldn’t play for us. He is still recovering, but given the skills and ability he has, we picked him with that intention, and we have retained him again.

“Releasing players in always a difficult decision, because we are like one big family. The cricketers, whether they play or they don’t, often contribute in many other ways to a side. However, this was an opportunity for us to fine-tune the squad, and look at the strategies going forward.”

Meanwhile, Mitchell Starc had revealed that he was informed by KKR that he was released from the squad via a text message. Mysore cleared the air.

“It has been picked up out of context, because we (KKR and Starc) have had a great relationship. Even when we picked him last year, not only was he over the moon, but he was also appreciative towards the confidence we had shown in him. He was extremely disappointed he couldn’t come here for last year’s IPL, and to be frank, so were we. It left a big hole in our line-up. This time, when we had an exchange of messages, he was appreciative of where we were coming from. It was very cordial, and professional type of an exchange,” he said.

“The auctions this year will depend heavily on the availability of the players, especially given that the World Cup is coming up. The Australian board (CA) has apparently said that their players appearing in the IPL and the ones appearing in the World Cup has to return (for national duty) no later than May 1. The English board (ECB) has apparently got a similar clause, so that will be an important consideration.

“We are glad the youngsters we showed faith in have grabbed the opportunity with both hands. We are in a fairly happy position, and we feel that we have most of our bases covered.” 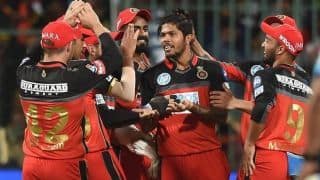 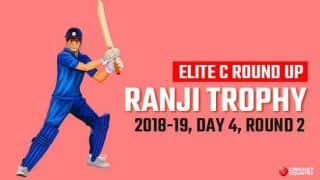