IPL 13: Broadcaster Could Introduce 'Commentary From Home' After Recent Success

IPL 13: Broadcaster Could Introduce 'Commentary From Home' After Recent Success

Former India allrounder Pathan termed commentating from inside his room an "extraordinary experience".

With work from home becoming a necessity in the times of coronavirus pandemic, cricket has also been left untouched by the change. Recently, during an exhibition cricket match in South Africa, the broadcaster in India had lined up the likes of Irfan Pathan, Deep Dasgupta and Sanjay Manjrekar to commentate on the match from their respective homes.

The experiment was a success and soon the broadcaster could replicate it on a bigger scale in the upcoming season of IPL which in all likeliness is going to be held in the United Arab Emirates due to the COVID-19 situation in India.

The 3T Cricket Solidarity Cup, an experimental format, was played in Centurion and the live commentary for the game in Hindi was being handled by Pathan from his Baroda home, Deep Dasgupta from Kolkata and Sanjay Manjrekar from his Mumbai residence.

The entire crew, in fact, was working from home spread across different parts of the country with the director calling the shots from Mysore.

According to a report by news agency PTI, virtual commentary can become a regular feature in cricket, at least for growing regional feeds like Tamil, Telegu and Kannada

Former India allrounder Pathan termed commentating from inside his room an “extraordinary experience”.

“It was an extraordinary experience though we were worried throughout because the internet speed can fluctuate and that affects the voice quality. Anything can happen anytime in live cricket and with technology not fully in your control, it can be tricky but Star did a wonderful job,” Pathan told PTI.

“Though this was an exhibition game, everyone took it very seriously as they all wanted the show to resume (after months of break). Star is usually very thorough with its planning and execution but commentary from home in the IPL will be a massive challenge,” he added.

While Pathan says commentating from the ground cannot be compared with anything else but working calling the game from a studio, far away from the venue isn’t something new. The broadcaster produces as many as 10 feeds for the IPL with Hindi accounting for two-third of the overall viewership.

A broadcaster industry expert told PTI that remote production has evolved over the years and is now at par with on site production.

“Remote production has evolved a lot, and technology has enabled it to be to be at par with on site production if not better. Commentary from home is a step forward in that regard and that way anyone can log in from anywhere. It opens up to the world to you,” the expert said.

“Being on the ground is important but when you have a production in place where the commentator could see everything that he would see from the ground, at times with as many as 25 camera angles at his disposal, he can even see more than he would normally see at the ground,” the expert added.

For the 3T Cup, with travel restrictions in place, flying down commentators to South Africa or even at a studio was nearly impossible. So working from home was a necessity.

The internet speed of everyone involved was upgraded from 5 mbps to 20 mbps, which is a minimum requirement for live production.

Speaking on the challenges he faced, Pathan said not being able to see each other and thus establish a chemistry as to when to pause and give other the signal to start talking became an issue.

“We rehearsed it a day before the game just to test internet quality. We had screens put but we could not see each at all times, so when to pause and when to start talking was a challenge but we pulled it off. At times, there was delay in the feed, so there could be overlapping in that scenario. Overall, we did alright but when you are on the ground, it takes your commentary to the next level,” he revealed

“Commentary is not just about the game anymore, it is all about the cricketers. There is so much detailing and analysis nowadays. Commentary from home is surely an option but not sure how often we can use it,” he added. 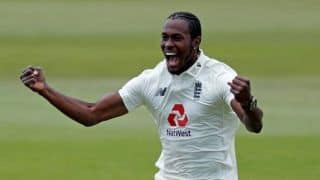