Bolstered by the inclusion of Kane Williamson, Sunrisers Hyderabad skipper David Warner is focussed on adding depth and power to his team’s fragile middle-order as it moves forward in the Indian Premier League.

Opener Jonny Bairstow’s sublime fifty was complemented by Williamson’s 26-ball 41 and a stellar bowling effort from Rashid Khan as Sunrisers Hyderabad outplayed Delhi Capitals by 15 runs to open their account in the 13th IPL here on Tuesday.

“We were on track to get 170-180, there is talk of our middle order not being that good, but we put our game together against Delhi and we backed ourselves, we played fluently and we got ourselves a good total,” Warner said at the virtual post-match press conference.

To strengthen SRH’s batting, the seasoned Williamson was drafted in at the expense of Mohammad Nabi, but the skipper assured the Afghanistan allrounder that he would again get his chances.

“It was a big call but, at the end of the day, if we get our top four batting right and back our bowlers, we will come good. For us, it is important to establish in the middle. Moving forward, Nabi will come in as well,” said the prolific left-handed batsman, who shared a 77-run opening stand with Jonny Bairstow.

Defending 163, leg-spinner Rashid returned very impressive figures of 3/14, while Bhuvneshwar Kumar scalped two wickets and T Natarajan and Khaleel Ahmed (1/43) chipped in with one apiece to restrict Delhi to 147 for seven.

Warner was full of praise for his strike bowler Rashid, who was named the Man of the Match.

“Rashid knows what he has to do, the way he delivered for us against Delhi was great. He knows what to do, he bowled stump to stump, he knew he had a big role against Delhi with young Abhishek (Sharma) at the other end.

“Abhishek bowled his four overs and he was just hit during his last over, an extra bit of pressure was added on Rashid and he was outstanding,” said Warner.

SRH were asked to bat first after the coin landed in favour of Delhi Capitals skipper Shreyas Iyer.

“I think putting runs on the board, batting first was good, we lost the toss so obviously we had to bat first. I think Delhi bowled really well in the powerplay, they restricted me and Jonny.

“They executed really well in the powerplay, they had good fields for us, all in all, we had a good game…the way we approached it in the middle with Williamson coming, credit to our bowlers as well, especially the way they bowled in the middle,” he added.

The match also saw Jammu and Kashmir’s Abdul Samad making his IPL debut and Warner said he will look to encourage youngsters in the team.

During his brief stay in the middle, Samad smashed a six and a four to remain unbeaten on 12.

“It is great to give these young guys an opportunity because where else to show your talent when you can do it against the world’s best. You need to have that belief that you can do well.

“We needed someone at the back end. We brought him in because we knew he bowls leg-spinners as well. We knew what he was capable of. He is a good power-hitter. I have seen him hit long balls and I was very impressed.

“The great thing about the youth is the enthusiasm and passion. They want to learn, they are really picking our brains and trying to get the upper edge. We want to play with freedom. Let them play calm and clear,” Warner said. 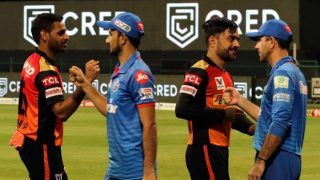 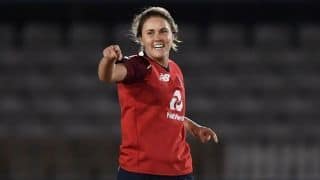