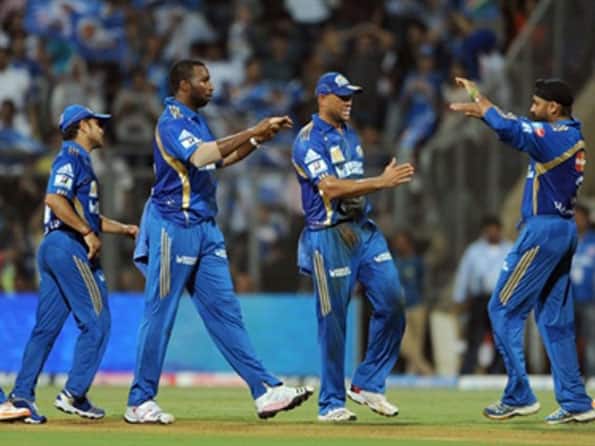 Punjab were never in the fray as they kept losing wickets at regular intervals. Munaf Patel and Lasith Malinga did the most damage grabbing two wickets apiece.

Shaun Mash kept Punjab in the hunt until Andrew Symonds started the Punjab downfall after he had snapped the wicket of Paul Valthaty. Then Kireron Pollard and Harbhajan Singh struck vital blows just when it mattered.

Earlier Paul Valthaty and Marsh had put on a 50 run for the second wicket to steady the visitor s chase of 160 against Mumbai at the Wankhede stadium in Mumbai.

Valthaty, who was struggling against the pace of Lasith Malinga, clobbered Munaf Patel for two boundaries after the bowler had dropped him in the fifth over. The Punjab batsman then took on Tirumalasetti Suman for a huge six in the ninth over.

The visitors were tied down by some tight bowling especially Lasith Malinga, who sent down couple of short deliveries to Paul Valthaty. Shaun Marsh eased some pressure of the visitors, smashing the Sri Lankan pacer for two consecutive boundaries in the fourth over.

The host had Punjab on the back foot after Harbhajan Singh provided an early breakthrough dismissing danger man Adam Gilchrist for duck in the very first over.

Dilshan to join Sri Lanka squad in England on May 11