IPL 2012: Adam Gilchrist backs batsmen to do well against CSK

IPL 2012: Adam Gilchrist backs batsmen to do well against CSK

Kings XI Punjab skipper Adam Gilchrist is confident that his batting line-up will deliver when they take on defending champions Chennai Super Kings in a "challenging" Indian Premier League match, on Saturday. 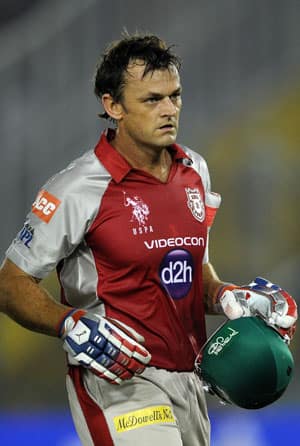 Kings XI Punjab skipper Adam Gilchrist is confident that his batting line-up will deliver when they take on defending champions Chennai Super Kings in a “challenging” Indian Premier League match, on Saturday.

Gilchrist, though, will not part of the action as he is yet to recover completely from a hamstring injury.

Since Punjab have lost five of the eight matches they have played, Gilchrist knows they cannot afford to lose from now on, if they have to qualify for the next stage.

“Every match is important to us. It is a challenge playing defending champions. In each match we are trying to improve on our performance. So it is an important game for us,” Gilchrist said.

The former Australian cricketer said all of his batsmen, including the domestic Indian star, have improved as the tournament has progressed and they will do well tomorrow.

“In the last three games they have definitely improved and have made contributions. The top order batsmen have been giving solid starts. The domestic stars have not scored huge runs but they have improved their batting performances definitely,” he said

As for the wicket, the Aussie hoped it would behave better.

“The wicket looks pretty dry and without grass. It is not quite hot as of now. It is an afternoon match rather than an evening match. The first game of the tournament it was an odd wicket but I feel the wicket will play true.”

Asked when he himself would be back to action he said, “I am still not sure. I cannot put a date on it. Initially it was said it will be three or four weeks for me to recover. Now I cannot pinpoint a date. But, certainly I have been progressing very well. I am very happy with the last few days. (PTI)