Rajasthan Royals player Ajinkya Rahane insisted after their win against Pune Warriors India on Tuesday evening that it is unfair to compare his batting with team s skipper Rahul Dravid, and asserted that he would like to create his own identity in International cricket. 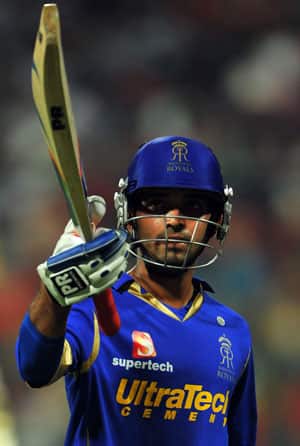 Rajasthan Royals player Ajinkya Rahane insisted after their win against Pune Warriors India on Tuesday evening that it is unfair to compare his batting with team s skipper Rahul Dravid, and asserted that he would like to create his own identity in International cricket.

“It s very difficult to replace a player of his stature. I want to create my own identity, so I don t want to be compared with him. It s a very good opportunity for me to learn from him and I would want to learn more in the upcoming matches. He does share a lot,” said Rahane.

Ajinkya Rahane has been a success in this edition of IPL with 463 runs from 12 matches and remains a strong contender for the Orange cap.

“I just know that if I keep playing well, Orange Cap is going to be with me. I just want to contribute to the team in every match,” said the Rajasthan Royals opener.

In the previous season he was in the Mumbai Indians squad though he failed to secure enough opportunities to prove a point. Despite missing out on playing for his home team in IPL Rahane said, “I don t have any complaints, as it was the team management s decision. Now I am playing for RR and we have a very good team and the atmosphere is also good. I am very happy here.”

The Royals currently have 12 points from as many matches which has kept them in the hunt for a playoffs spot. “It s always good to win a game. Last match was very crucial for us as we had lost a lot of games on the trot and the momentum we got was very good. Today also it was a team effort, and I am feeling good about it,” Rahane was quoted as saying by the official website of Indian Premier League.

Rahane s success hasn t come across as a surprise for many of his mentors as he had been consistent in the domestic season since past few years.

“I have been playing domestic cricket for the last five years and the experience is helping me a lot here. Praveen Amre has also given me a lot of tips, which are helping me here,” said the Rajasthan Royals opener.

Playing for Mumbai since 2007, Rahane has scored almost 5000 runs in first class cricket with 18 centuries to his name at an average of 68.47. Quite similar to his Royal s skipper Dravid, Rahane too remains the batting mainstay for Mumbai team for putting up consistent performances match after match.

Rahane felt that pressure to perform well after a successful outing is a challenge which he isn t worried about.

“If you perform well, there will be a lot expected out of you. I always take expectations in a way that I feel all of them are supporting me. I always try to improve day-by-day and match-by-match,” he concluded.