Delhi Daredevils' pacer Umesh Yadav said this IPL edition has been a "lot better" for him than the last season after his Man-of-the-Match performance helped the hosts register a five-wicket win over Kings XI Punjab and qualify for the knockout stage of the tournament. 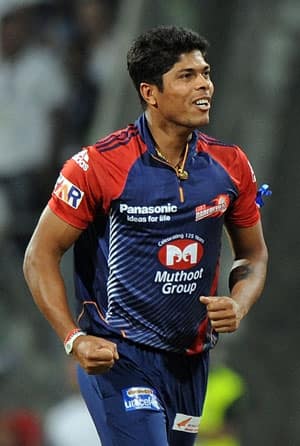 Delhi Daredevils’ pacer Umesh Yadav said this IPL edition has been a “lot better” for him than the last season after his Man-of-the-Match performance helped the hosts register a five-wicket win over Kings XI Punjab and qualify for the knockout stage of the tournament.

“I also think that this is one of my best performances this season. My last IPL wasn’t that good but this season has been a lot better. I’ll continue my progress and try to come up with even better performance,” said Umesh, who took three wickets to restrict Kings XI to a modest total of 136 for 8 last night.

Delhi managed to reach the target with an over to spare and consolidate their position at the top of the table with 20 points.

Umesh said the team will not take the coming games lightly against the Royal Challengers Bangalore here tomorrow and Kings XI on May 19 at Dharamsala.

“We are not going to take our coming games lightly. We are going to give our best to win the remaining matches also,” he said.

Chris Gayle’s devastating form has clearly been playing on the minds of the Delhi Daredevils’ players as Umesh admitted that the explosive Jamaican’s early dismissal will be key to his team’s success against the RCB at the Feroze Shah Kotla stadium.

“Obviously before playing RCB, we will make our strategies and plans. We need to get him (Gayle) out early.

Our plan would be to restrict their scoring and bowl them out as soon as possible,” he said.

Talking about the Daredevils’ present IPL season, Umesh said, “Last year due to some wrong combinations our team was not able to perform to its capability. With the addition of Mahela Jayawardene and Ross Taylor, our batting line-up looks solid. We will hope to continue to perform the same way as we are performing right now.”

The Vidarbha pacer also said the pressure would be slightly less in the coming games with the team already assured of a play-off berth.

“Pressure would be slightly less but we will look for wins in remaining fixtures.”

Asked about the Kotla strip, he said, “The pitch was good for both batsmen and bowlers. It wasn’t like it was helping the bowlers more. All we were thinking was to bowl in the right areas and that helped our team. Varun Aaron bowled well, overall it was a good outing for our fast bowlers.”

New Zealand captain Ross Taylor’s form has been a cause of concern for Delhi Daredevils but Umesh said he would soon find his lost touch.

“It’s not necessary that if Ross is not at his best now, he would never hit his form. I feel in the coming matches he is going to come up with some crucial contribution for the team.” (PTI)

Gambhir has been awesome, but KKR has to click as a team to realise their dream