Kolkata Knight Riders captain Gautam Gambhir is not too bothered about Yusuf Pathan's extended lean patch and preferred to stay positive, saying it is a "good sign" that the team is still winning games without much contribution from the big-hitting batsman. 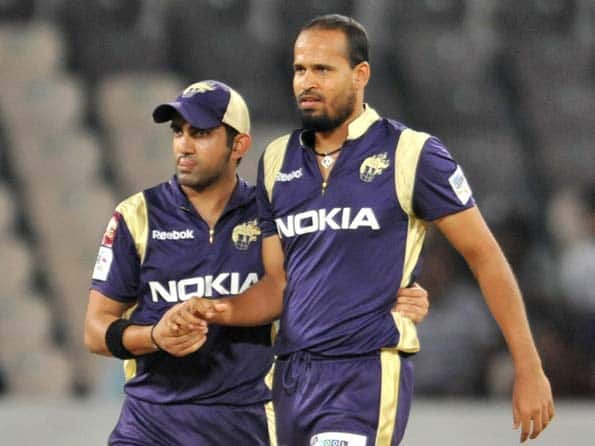 Kolkata Knight Riders (KKR) captain Gautam Gambhir is not too bothered about Yusuf Pathan‘s extended lean patch and preferred to stay positive, saying it is a “good sign” that the team is still winning games without much contribution from the big-hitting batsman.

Pathan, who was bought by KKR for USD 2.1 million, is yet to justify his price tag as he aggregates a dismal 48 runs from nine matches this season, averaging a poor 6.85.

But Gambhir backed the under-fire batsman to the hilt and said it was just a matter of time before Pathan strikes form.

“We’re not thinking about his (Yusuf Pathan’s) form. He’s a quality player. It’s just about one innings. He’s a big match player, and hopefully, he can turn it around. It’s only a matter of time before he starts hitting the ball well,” the KKR skipper said.

“If we’re winning without him contributing much, it’s a good sign for the team,” Gambhir said after his side defeated Chennai Super Kings (CSK) by five wickets on Monday to move up to the second position in the standings with 13 points from 10 matches.

Gautam Gambhir said the away win against title holders CSK was a result of team effort.

“It was a complete team effort. It’s about doing well in all departments and that’s what we did. We bowled well and restricted them to a decent total and then chased well. We never panicked towards the end,” he said.

Asked to bowl, KKR first restricted CSK to a modest 139 and then, riding on Gambhir’s 52-ball 63 and young Debabrata Das’ unbeaten 11 off four towards the rear, overwhelmed the target with two balls to spare.

“Things got a bit tough in the end. But it would always have been tough since Chennai are always a good side in their own backyard,” Gambhir said of the chase.

“It’s not about how you start but about how you finish. I think a lot of credit should go to Debabrata Das. For someone so young and without much experience, he held his nerves.

FFinishing a game like this against a quality side makes it creditable. He’s someone you’ve to look out for. He’s just got to back himself and his talent,” said the KKR skipper praising Das, who smashed Ravichandran Ashwin over mid-wicket to take KKR home.

Asked about the secret of his stupendous form, Gambhir said: “Nothing. There’s no secret to good form. It’s only about staying focused and hitting the balls. When things go your way, make full use of it because you don’t know when a bad patch will hit you.”

Monday’s win was also KKR’s maiden win against Chennai in the five editions of the Twenty20 league.

“I’m a firm believer that past is past. You don’t look back at things because that is history. I always believe in looking forward. It never for once crossed my mind that we’ve never won in Chennai. It was a fresh game and that’s how we played it,” was Gambhir’s reply when asked about the feat.

For KKR a big match is in the offing as they take on table toppers Delhi Daredevils (DD) at Eden Gardens on Sunday, but Gambhir refused to give much importance to the tie.

“It’s not a big clash. For me, it’s just another game of cricket. We’ve got to approach it as any other game,” he said. (PTI)