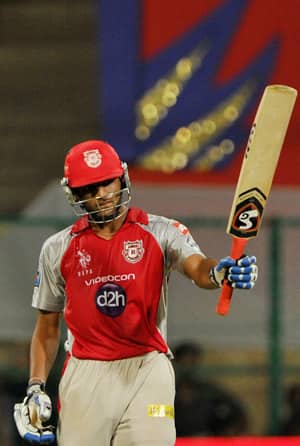 Virtually out of the reckoning for a place in the plays offs, a demoralised Deccan Chargers would look to salvage some pride when they take on Kings XI Punjab in an Indian Premier League match here on Tuesday.

Having won just two out of the 11 matches they played so far in the tournament, Deccan is presently languishing at the bottom of the team standings with just five points.

Though Deccan batsmen put up an impressive show against Royal Challengers Bangalore on Sunday, the lacklustre performance of their bowlers and AB de Villiers superlative batting poured cold water on the Hyderabad outfit’s hope of staging a comeback.

After posting a more-than-challenging 181 for two on the board, Deccan bowlers failed to rise to the occasion as de Villiers scored a whirlwind 47 not out off just 17 balls to to guide RCB to the five-wicket win with seven balls to spare.

There would be added pressure on Deccan on Tuesday as they will play in Hyderabad for the first match in this tournament.

Deccan’s batting, off late, has fired with big-hitting Cameron White, who has scored three half centuries in the last five games, Shikhar Dhawan, captain Kumar Sangakkara and Daniel Harris all finding themselves among runs.