There is little doubt that Delhi Daredevils are the odds-on favourites but they will need to guard against complacency when they take on bottom-placed Deccan Chargers in an Indian Premier League match. 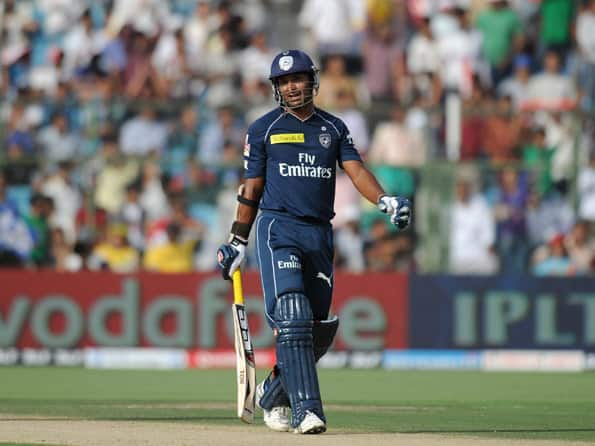 Deccan Chargers captain Kumar Sangakkara, who stroked his way to 44 off 32 balls against Rajasthan on Tuesday, will again shoulder the bulk of the responsibility AFP

There is little doubt that Delhi Daredevils are the odds-on favourites but they will need to guard against complacency when they take on bottom-placed Deccan Chargers in an Indian Premier League match.

The Daredevils are in red-hot form having beaten heavyweights, Mumbai Indians, comprehensively at the latter’s backyard, and they would look to continue the momentum and extend the winning run here at the Feroz Shah Kotla.

Form and team balance apart, the fact that the Daredevils are playing in front of the home crowd, is likely to make the task even more arduous for the Chargers.

Up against a side that has notched three wins from four matches, the numbers are heavily stacked against the Chargers who are yet to open their account.

The Chargers came close to winning their first game in the fifth season of the IPL, against Rajasthan Royals, but Brad Hodge’s pyrotechnics spoilt their plans yesterday.

Kumar Sangakkara’s men, though, can take heart from the fact that they fought till the end against the Royals.

It will, however, take a little more than that for the Chargers to make a match out of it, when they take the field against Virender Sehwag’s men who have, literally, lived up to their reputation so far in the tournament.

If there is a certain Sehwag at the top of the order to provide the team blistering starts, the middle-order is packed with proven, world class stroke-makers like Kevin Pietersen and Mahela Jayawardene, and the addition of New Zealander Ross Taylor, as expected, has only bolstered the line-up.

Prior to the start of the tournament, their bowling, especially the spin department, was thought to be a weaklink, but young Shabaaz Nadeem has unfailingly delivered the goods for the Daredevils.

The 22-year-old left-arm spinner is coming off a solid performance against a power-packed Mumbai line-up, and the confidence that his skipper has on him, is expected to make him a better bowler in the coming matches.

South African Morne Morkel has spearheaded the pace attack like he ought to have, well complemented by Umesh Yadav, Irfan Pathan and Ajit Agarkar.

The Daredevils’ strength can be gauged from the fact that they have a hard-hitter like Aaron Finch on the bench, and be rest assured, the Australian is surely waiting for an opportunity.

What makes the Daredevils even more dangerous is that, not just one or two, but almost the entire team has been playing as a unit.

If the side’s illustrious batsmen have fired in unison, the bowlers have been equal to the task. Look no further than the scorecard against Mumbai for proof. Pietersen, of course, was an exception.

Barring the reverse against Royal Challengers Bangalore at the Chinnaswamy stadium, the Daredevils have been clinical in their wins, be it over Kolkata Knight Riders at the Eden Gardens, defending champions Chennai Super Kings here, or Mumbai Indians at the Wankhede stadium.

Given the unpredictability factor associated with this form of the game, more so in the case of IPL, it would be a folly to rule out any team, but, in the current scenario, the Chargers are in some spot of bother and it would surely take a great effort from them to disturb the hosts’ momentum.

The only way they can hope to pull it off tomorrow, is by playing out of their skins, and hope luck plays its part.

Sangakkara, who stroked his way to 44 off 32 balls against Rajasthan yesterday, will again shoulder the bulk of the responsibility.

Jean-Paul Duminy will do well to repeat the whirlwind knock he produced against Rajasthan, and Shikhar Dhawan too, would look to carry the momentum of the last match.

Both Duminy and Dhawan slammed brisk half centuries in their last outings, albeit in a losing cause.

As far as bowling is concerned, Dale Steyn took a bit of stick at the Sawai Man Singh track and Kotla is unlikely to offer him anything different, but make no mistake, the South African is still one of the world’s premier fast bowlers.

Legspinner Amit Mishra bowled well in the last match, picking up three wickets, and he can take heart from that performance. Then there is Australian allrounder Daniel Christian, medium pacer Anand Rajan and slow left-arm bowler Ankit Sharma.

But all said and done, a litmus test awaits the Chargers.