After winning the toss, Royal Challengers Bangalore won toss and opted to field first against Kings XI Punjab in their Indian Premier League (IPL) at Mohali on Friday. 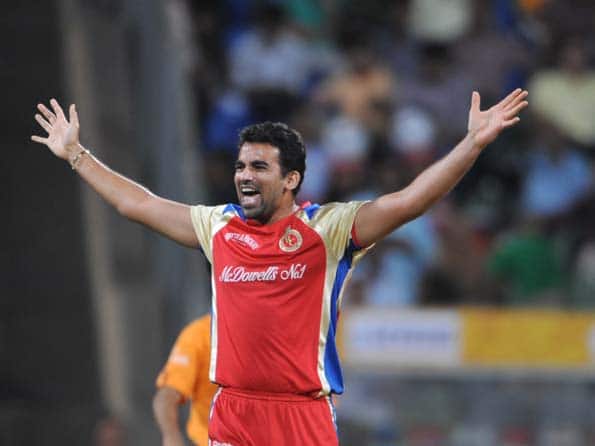 Royal Challengers Bangalore will look towards Indian strike bowler Zaheer Khan, who has so far earned five scalps, to do a better job on Friday AFP

After winning the toss, Royal Challengers Bangalore won toss and opted to field first against Kings XI Punjab in their Indian Premier League (IPL) at Mohali on Friday.

West Indian swashbuckler Chris Gayle’s devastating form will be a cause of immense worry for the inconsistent Kings XI Punjab when they clash with Royal Challengers Bangalore in an IPL match on Friday.

Punjab slumped to their third defeat, first in their own backyard, when Kolkata Knight Riders beat them comprehensively by eight wickets on Wednesday.

Inconsistent batting has been the chief cause of concern for the Adam Gilchrist-led side, which managed only 124 for 7 against KKR here after electing to bat first.

RCB, on the other hand, displayed sensational batting in the win over Pune Warriors in their previous match.

Gayle’s sensational knock of 81 of 48, studded with eight sixes including five in a single over, helped the franchise snatch a thrilling last ball win over Warriors in Bangalore this week when they chased down a formidable 182.

Inconsistent form of their top order, that includes Gilchrist, who pulled a hamstring in last night’s match, has been the local franchise’s main concern. The skipper is yet to hit a big knock, with yesterday’s 40 being his top score.

Gilchrist’s Aussie compatriot, Shaun Marsh has also not yet shown his full potential and the batting hero of last year’s edition Paul Valthaty has failed miserably and may face the axe.

Punjab’s batting has been revolving around Gilchrist, Marsh and David Hussey and it’s the inconsistency which worries Gilchrist.

For Bangalore, Virat Kohli would be hoping that he comes good as the dashing batsman has made only 109 runs from five games that includes 57 against Chennai Super Kings at Chennai on April 12, which RCB lost despite posting a total of 205 runs on the board.

After his failure in a couple of games, AB de Villiers was back in form in the last match against Warriors making 33. His innovative stroke-playing may come in handy for the RCB.

RCB skipper Daniel Vettori, who may have got only four wickets so far, has been bowling a tight line and has been able to contain the batsmen along with Sri Lankan spin legend Muttiah Muralitharan.

However, RCB will look towards Indian strike bowler Zaheer Khan, who has so far earned five scalps, to do a better job on Friday.

Khan’s most impressive performance came in the match against Rajasthan Royals, which the latter won by massive 59 runs, in which Ajinkya Rahane had made 103 not out. The pacer had figures of 4-1-15-1 in that match.