Chennai Super Kings top order chipped in with significant contributions to help their side reach 173 for eight from their allotted 20 overs in their IPL 2012 game against Mumbai Indians on Sunday. 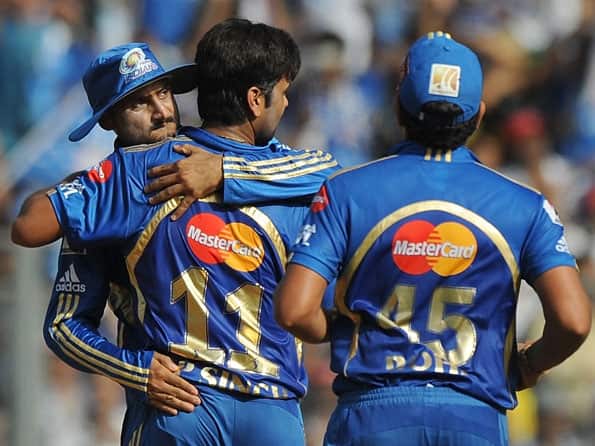 Chennai Super Kings top order chipped in with significant contributions to help their side reach 173 for eight in their allotted 20 overs in their IPL 2012 game against Mumbai Indians on Sunday.

Vijay, who was struggling with the bat in this edition of the Twenty20 league, slammed three sixes and four boundaries during his knock of 41 which came of 29 balls.

The opener along with Faf du Plessis provided Chennai a blistering start as the two added 47 runs in 5.2 overs.

Their partnership came to an end when the South African du Plessis was run out for nine, which came off 11 balls.

Vijay s rapid innings came to an end in the sixth over, when he was bowled by RP Singh.

Suresh Raina and Dwayne Bravo then teamed up to take Chennai forward. Raina and Bravo added 62 runs for the third wicket, which strengthened their side s position.

Raina s quickfire innings of 36 came to an end when RP Singh pulled off a stunning catch fielding at point off James Franklin. Raina struck two sixes and three boundaries and faced 21 balls to score 36.

Bravo, who scored a crucial 40 off 33 balls, struck three boundaries and a six before falling to Mumbai pacer Lasith Malinga.

Dhoni clobbered two boundaries and a six during his knock of 25 off 15 balls.