Pune Warriors will look to arrest the slide when they take Mumbai Indians in an Indian Premier League match at the Subrata Roy Sahara Stadium on Thursday. 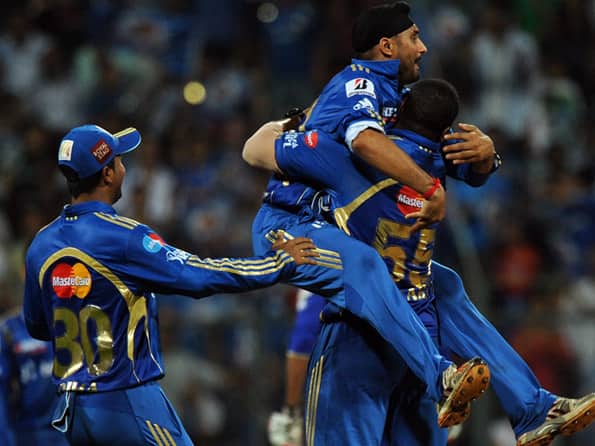 Harbhajan Singh’s boys have so far managed 10 points from nine matches and are currently placed at No.3 in the IPL Points Table AFP

Pune Warriors will look to arrest the slide when they take Mumbai Indians in an Indian Premier League match at the Subrata Roy Sahara Stadium on Thursday.

Pune are currently lingering at the seventh place in the points table just ahead of Kings XI Punjab, with four wins from 10 matches.

Their second defeat to bottom-placed Deccan Chargers within a week has made their task to reach the last-four stage of the tournament even more difficult.

In fact, the Sourav Ganguly-led unit will have to win all their remaining matches to make a claim for the semi-final berth.

Mumbai Indians, on the other hand, are in a comfortable position compared to their rivals, but the team’s inconsistent performance has not allowed them to gain any momentum in the series so far.

Harbhajan Singh’s boys have so far managed 10 points from nine matches and are currently placed at No. 3.

Their batting line-up came under fire against the Chargers in their previous encounter at home. Though, the team managed to chase down the small total of 100 runs with five wickets in hand, their discomfort against quality pace bowling of Dayle Steyn was there for all to see.

The team banks heavily on Sachin Tendulkar at the top, and with the veteran not looking his best since returning from a finger injury things do not look very good for Mumbai and unsettled opening pair adds to their woes.

The team has so far experimented with their opening combo with Richard Levi, Adrian Blizzard, James Franklin, Davy Jacobs, Ambati Rayudu and T Suman all having a shot at the top spot.

Their middle order too has looked a bit susceptible, with Rohit Sharma looking good in patches and Franklin too not having a consistent run with the bat. Dinesh Karthik has also been out of colour.

Steven Smith has been consistent with the bat and Ganguly too has come good of late.

The real worry, however, is their bowling. Apart from Wayne Parnell and Bhuvneshwar Kumar nobody was impressive with the ball against Chargers and with Ashok Dinda still nursing a side strain, Pune will have to make their choices cautiously.

The team leaked around 80 runs in their last five overs against Chargers, something the skipper will have to address before taking on Mumbai. (PTI)

Catch Live Score and ball-by-ball commentary of the PWI vs MI match at Pune, here

Sourav Ganguly the most searched IPL captain on Google