Rajasthan Royals (RR) would aim for a hat-trick of wins and inch closer to a playoffs spot when they take on Chennai Super Kings (CSK) in the Indian Premier League (IPL) 2012 match at Jaipur. 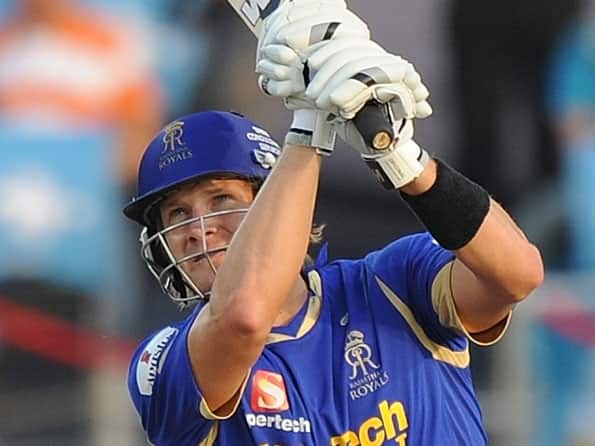 Rajasthan Royals (RR) would aim for a hat-trick of wins and inch closer to a playoffs spot when they take on Chennai Super Kings (CSK) in the Indian Premier League (IPL) 2012 match at Jaipur.

Rajasthan have the winning momentum with them and have emerged from the shock of four consecutive defeats by posting two impressive wins over Kings XI Punjab and Pune Warriors.

The match will be a keenly-fought contest because a defeat here might just spoil the chances of either team to make it to playoffs.

The team composition for the previous two matches has been remarkable for Rajasthan Royals. With Australian all-rounder Shane Watson and pacer Shaun Tait in the side, they have proved that they are better as a team than their more fancied rivals.

Shane Watson has been in fine form both with the bat and ball while Tait has proved that he is more than a handful in conditions that suit him.

The batting of the hosts revolves round the opening partnership of skipper Rahul Dravid and Ajinkya Rahane who has surrendered his orange cap to Delhi skipper Virender Sehwag.

Shane Watson, at number three, has added strength by smashing the bowlers while Ashok Menaria, Brad Hodge and Owais Shah have played their role to perfection.

The bowling has been consistent and Shaun Tait, who had to wait for a couple of games to get a chance, has been lethal in the past two matches. The reliable Sidhartha Trivedi and Watson give a settled look to bowling.

On the other hand, champions for the past two years, Chennai Super Kings have not been in prime form this season and are languishing at sixth with five victories and six defeats.

They have not been able to finish off close games and have lacked consistency.

But Chennai have enjoyed a three-day break which might have provided them with enough time to regroup and plan for their remaining four games. The fact that they are the most successful IPL team, having played in three finals and have been victorious twice, should also give them confidence.

Besides, Mahendra Singh Dhoni leads a team that boasts of several international stars who have the ability to turn games.

Their batting has a solid look on paper with Faf du Plessis and Murali Vijay at the top and the likes of Suresh Raina, Dwayne Bravo, Dhoni and S Badrinath coming down the order.

The fact that Chennai beat Rajasthan Royals by seven wickets at home should also give the visitors some confidence.

The slight drizzle last night has increased the humidity which might also help the visitors. (PTI)