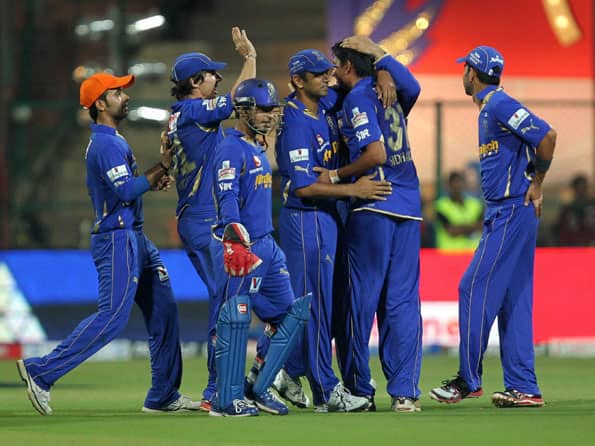 A star-studded Royal Challengers Bangalore will be eyeing revenge and continue their winning streak when they take on formidable-at-home Rajasthan Royals in an IPL match on Monday.

The visitors have the arsenal to turn the tables on the hosts who would be weary after the last-over loss to Chennai Super Kings in the away match.

Bangalore, beaten by Rajasthan in their home game by 59 runs, have been an improved lot thereafter. With West Indian Chris Gayle in cracking form, the visitors have reached Jaipur with fine victories over Pune Warriors and Kings XI Punjab in their previous two matches.

They have a strong line-up but poor form of Virat Kohli, remains a matter of concern. He has done little of note except for a 54-run knock against Chennai Super Kings.

The batting revolves around Gayle and the opponents try to get him out early but he has continued to clout the bowlers all over the park.

His previous two innings of 87 against Kings XI and 84against Pune Warriors powered his team to facile victories.

The rest of the batting has hard-hitting South African A B De Villiers, Saurabh Tiwary, Mayank Agrawal and Daniel Vettori apart from Sri Lankan Tillakaratne Dilshan who has been kept out after his initial failure.

The hosts, on the other hand, do not have big names but the team is well-balanced. The first centurion in this edition of IPL, orange cap holder Ajinkya Rahane, and the daring Owais Shah have clicked often and the support from the likes of Ashok Menaria, skipper Rahul Dravid, Brad Hodge and Kevin Cooper has been good.

The fact that they are back on home turf and know the conditions well might help them but they will have to fight tooth and nail to prevail over the Royal Challengers who are preparing for revenge.

Despite all this, Rajasthan Royals are second on the table with eight points from seven matches while the visitors are at seventh but they have played a match less and a win here may change the position.