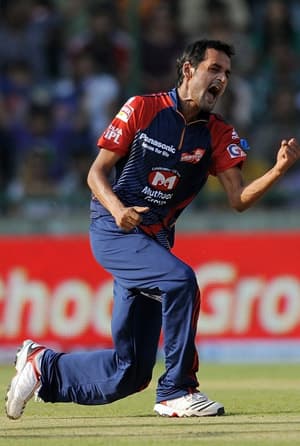 Shahbaz Nadeem has been the best find for the Daredevils AFP

Ask any franchise management and they will say that the outstanding performances of these little-known players have not come as a surprise to them. They take credit for scouting for these youngsters. They are no longer non-entities, they are in the thick of things along with the overseas and Indian stars playing in the twenty20 tournament.

Delhi medium-pacer Awana had to struggle for recognition. He has come a long way in five years of first-class cricket and today he is hurt that national selectors did not think he is good enough to go with India A team to West Indies despite logging in 57 wickets last season. “Obviously, when you get 57 wickets in the domestic season, you expect a call-up. I was hurt initially but this rejection has made me even more determined to perform better in the next domestic season,” he was quoted as saying.

He is bowling with vengeance and for starters, he has lent much needed firepower to the Punjab attack. In six matches this season, he has picked up nine wickets at an average of 21.77. The 25-year-old took four wickets in his second match against Royal Challengers Bangalore and after that he has been a regular in the side, performing steadily.

Diminutive left-arm spinner Nadeem has been the best find for the Daredevils. He has been a revelation, bowling in powerplay. The 22-year-old from Bokaro made his Ranji Trophy debut for Jharkhand at 14 and is so experienced that he played all ten matches for his franchise, taking eight wickets.

His best performance (three for 16)came against Deccan Chargers at Feroze Shah Kotla. besides his strike rate, he has a good economy too (6.67).

Das playing for the Knight Riders, might not have got big runs, but coming down the order, the right-hand batsman has played some match winning innings. His latest heroics came against Chennai Super Kings. Chasing 140 for victory, Kolkata found themselves in trouble when Gambhir departed in the penultimate over with the Knight Riders still needing 16 runs.

Das came out and played a cameo, cracking 11 off just four balls to give his side a crucial victory. The Bengal batsman has got five opportunities this season and has been dismissed only twice. He averages 45.2 this year and has a strike rate of 146.55.

Mandeep Singh has been another young player who has shown improvement with each outing. The 20-year-old is one of the key figures in taking Punjab up the ladder and a place in the play-off. The former India under-19 player is the 10th highest run-getter with 277 runs and has outscored his more illustrious teammates like Australians Shaun Marsh and David Hussey.

The trend is quite clear to see, the teams with talented domestic cricketers are doing well. Players like Mayank Agarwal (Royal Challengers Bangalore), Manish Pandey (Pune Warriors) and Shadab Jakati (Super Kings), who have done well in the past, are not able to replicate their performances and that is telling on their teams adversely. (IANS)