Mumbai Indians skipper Harbhajan Singh said that his side is hoping that Sachin Tendulkar is available to play their IPL game against Pune Warriors on Friday as the x-ray report did not show anything wrong with his injured hand. 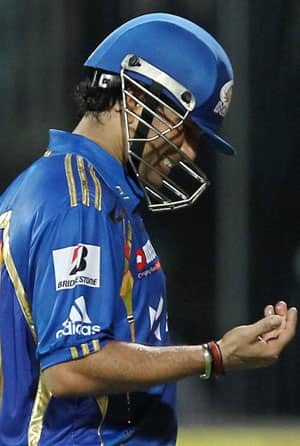 Mumbai Indians skipper Harbhajan Singh said that his side is hoping that Sachin Tendulkar is available to play their IPL game against Pune Warriors here tomorrow as the x-ray report did not show anything wrong with his injured hand.

“Nothing has come in the x-ray. We are hopeful he will play tomorrow,” said Harbhajan at the pre-match press conference today.

Tendulkar got hit on his right hand index finger when he fended at a short, rising ball from Chennai Super Kings speedster Doug Bollinger in the IPL 5 opener in Chennai yesterday and retired hurt.

Talking about the match against Sourav Ganguly-led Warriors tomorrow, Harbhajan said their opponents were a good outfit even without India’s World Cup hero Yuvraj Singh who is recovering after taking treatment for a rare form of cancer.

“Pune Warriors are a very good side and we don’t want to take anything for granted. Without Yuvraj they are obviously slightly lesser (strong). But they still have the likes of Ganguly, Robin Uthappa, Manish Pandey We just want to concentrate what we have and what we can do,” said the feisty off-spinner.

He said the eight-wicket win over the Chennai Super Kings yesterday was a good beginning but the team is to move forward.

“Always good to win your first game, but that is over.We want to move ahead. Like in Chennai we need to start well and hopefully finish the game here tomorrow on the same note,” he said.

Stating that captaining the team was challenging, Harbhajan again thanked Tendulkar, whom he replaced at the helm after the champion batsman relinquished the job before the start of the tournament, for the support he has been giving to him right through his career.

“His support has been immense. Without his support it would have been difficult (to captain team). He’s always there to guide us whether he’s captain or not. He’s always been there for all of us not just IPL but throughout my career whenever I needed him or for that matter any of the senior guys like Rahul Dravid Srinath and Anil Kumble.

“It’s great to have had seniors like them who have guided us the way to make us successful cricketers. He (Tendulkar) has been terrific with the support he has given me not just yesterday but also in the Champions T20 League. He was not there in the playing 15 as he was injured but his support and guidance was very important. Without his support I don’t think we would have won the title,” said Harbhajan who led the side to the CLT20 title last year.

Harbhajan was happy to have found an attacking opener like Richard Levi of South Africa who made his IPL debut yesterday to partner Tendulkar at the top.

“It’s nice to have a guy like Richard Levi who can give you a brisk start. In T20 cricket that’s the kind of start you look for. In the first six overs, you look to get as many as you can. It becomes easy for the middle order then to bat on. He’s a very exciting cricketer,” he noted.

Asked about his team’s chances in the tournament, Harbhajan said the process of playing as a single unit was the most important thing to do.

“We have the team to play well and as a unit would strive to continue to do well. All the other teams are good and competitive. We want to be humble in our process, stay focused and enjoy our cricket. If we do that we will get the result we are looking for,” he said. (PTI)