The Wankhede pitch was criticised by Mumbai Indians (MI) captain Harbhajan Singh in their last match and on Saturday batsman Rohit Sharma said his side were preparing for all eventualities as they don't know how the track would play on Sunday in their IPL match against Chennai Super Kings (CSK). 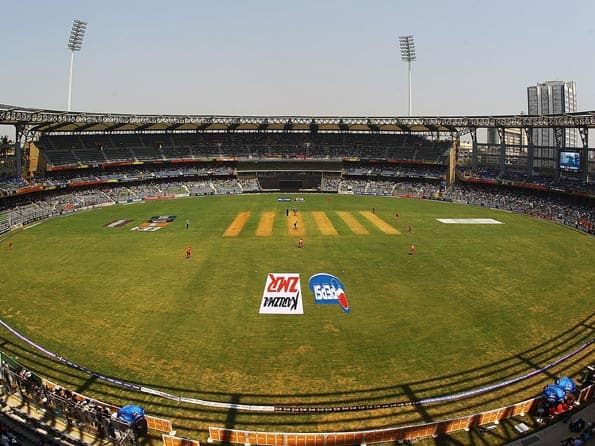 The Wankhede pitch was criticised by Mumbai Indians (MI) captain Harbhajan Singh in their last match and on Saturday, batsman Rohit Sharma said his side were preparing for all eventualities as they don’t know how the track would play on Sunday in their IPL match against Chennai Super Kings (CSK).

“We don’t know how the wicket will play. The last time we played here the wicket was seaming around and bouncing and we thought that we were playing in Australia on a Perth wicket,” said Rohit, referring to the game on April 29 against Deccan Chargers (DC).

The Chargers were shot out for a lowly 100 in 18.4 overs and then Mumbai struggled initially against the fiery pace bowling spell of Dale Steyn before romping home quite comfortably. Mumbai captain Harbhajan said after the match that the pitch was “not a proper Twenty20 wicket”.

“We don’t know how the wicket is going to be (Sunday).

We will wait and watch what kind of a wicket we get here. You see (at the pre-match training session) the guys are working out; spinners are working out, fast bowlers are sweating it out there. We want everyone to be ready, you never know (how the track will behave),” said Rohit ahead of their return leg game.

He said though MI had beaten the Super Kings in the opening encounter of IPL 5 in the latter’s backyard on April 4, the home team will have to be vigilant of their southern rivals whose confidence will be up following their victory yesterday against Deccan Chargers at home.

“They did not have a great series so far with ups and downs with their performance as well. But we know that they are a dangerous team and are capable of bouncing back. We can’t take them lightly. They have come here after winning last night. Their confidence will be high. We have beaten them and will try and put pressure on them as they are playing away from home,” he said.

Rohit singled out in-form Super Kings opener Faf de Plessis, the Chennai team’s highest scorer with 376 runs from 11 games under his belt, as a key man in the batting line-up.

“du Plessis has been batting really well. We have to strategies how to go about their batting line up,” he said.

Rohit admitted that his team’s middle order, of which he is a part of, has not fired as it was expected to before the tournament, but pointed out that most other teams in the tournament were facing the same problem.

“It’s true our middle order has not been firing the way we want to but 2020 is a format where you will see a bit of inconsistency because you actually go out and play your shots there. It’s the case with most of the teams at the moment.

With most of the teams’ middle order seems not to be firing,” he said.

He did not feel that MI’s home display this season, three losses out of five played, was a worrisome factor, saying the team was currently third on the table despite not having played to its full potential.

“It’s not a worry. At the end what matters is how many games you have won. You would like to do well in your own conditions (backyard). People have come and supported us a long way, so we want to put up a better show when we come out tomorrow. I also see that so far on the table we stand third.

I think we have not played to our potential, still we are number three. It’s a positive sign for us that if all of us click together things will be different.”

Rohit conceded that the MI bowlers had done better than the batsmen so far, but pointed out that the team was third on the table which was what counted.

“Of course, our bowlers have done a tremendous job. So far we have played ten games and have restricted most teams to low totals. As a group we always talk about bowling and batting, our bowling has been doing well … batting has not gone the way we wanted. But as a group we are happy we are winning the games and are third on the table. That’s more than enough and that’s more important.” .

On his own blow-hot-blow-cold display, the 24-year-old batsman said the Twenty20 format was such that the batsmen needed to play shots and inconsistency was a by-product, pointing out that some of the shots he got out playing he will not dream of trying out in the other formats of the game.

“I admit that I could have done better. As a top order batsman I have to take more responsibility and play but I am not frustrated with the way things have gone for me. T20 is a format where you will get some success and some failures to go with.

“I have got out playing a couple of shots which I will never play in other formats. But Twenty20 gives that liberty to go and play your shots. If you don’t get out playing shots in this format then where else (would you do it)? I don’t regret that I had played loose shots or something like that because Twenty20 is a format where you have to play your shots,” said Rohit who leads the MI run-getters’ list with 233 runs from 10 games going into tomorrow’s encounter.

On Kieron Pollard, who hurt his shoulder while fielding in the away game against Delhi Daredevils and missed the previous two matches of MI, Rohit said a call would be taken tomorrow.

“He’s recovering well. We had a couple of matches where he was not part of the team. He was back in Mumbai resting.

Probably we might take a call on him tomorrow, regarding how he has shaped up fitness-wise,” he said about the West Indian all rounder’s availability for tomorrow’s game. (PTI)