Out-of-favour England batsman Owais Shah on Wednesday said that his impressive performances for Rajasthan Royals in the ongoing Indian Premier League is bound to be noticed by fans and administrators back home. 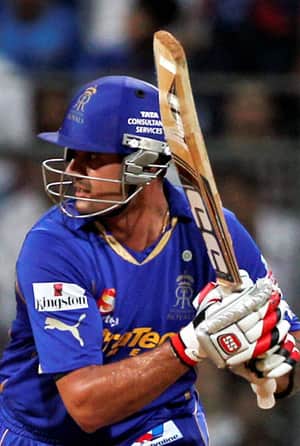 Out-of-favour England batsman Owais Shah on Wednesday said that his impressive performances for Rajasthan Royals in the ongoing Indian Premier League is bound to be noticed by fans and administrators back home.

He also said that he is banking on the Twenty20 event to earn his place back in the national side.

Asked whether he believes that his fine showing in IPL V would get due weightage back home, Shah said, “The performance in IPL is watched world over and I am sure back home too people must be looking at my performance.”

Shah showed potential during his early days for England but faded away with time due to inconsistency. But in the ongoing IPL, he impressed all and sundry with his strokeplay and occupies the second position in the run scores list with 216 runs from six games.

“I am thankful that Rajasthan Royals gave me opportunity to bat at the position I like. I had played for Delhi Daredevils, Kochi Tuskers and KKR earlier in IPL but the opportunities were just not there,” he said.

“I have a different role now and I have to apply and get accustomed to it and perform. I would be glad if I get a chance to play again for the country and I would be thankful to Rajasthan Royals for giving me the opportunity,” he added.

Shah, however, refused to comment on fellow countryman Kevin Pietersen’s statement that England’s lack of interest in IPL is down to jealousy.

“I don’t want to comment on the statement of Kevin Pietersen. But my personal view is that he did mean something else,” said Shah. (PTI)