IPL 2012 preview: Chennai aim to build on momentum in clash against Rajasthan

IPL 2012 preview: Chennai aim to build on momentum in clash against Rajasthan

Chennai Super Kings, pepped up by their 13-run win against Pune Warriors in an Indian Premier League tie on Thursday night, will be looking to join the front-running pack when they face leaders Rajasthan Royals on Saturday. 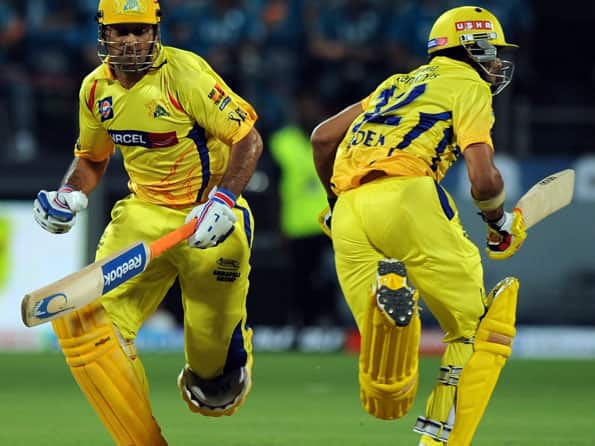 Chennai Super Kings, pepped up by their 13-run win against Pune Warriors in an Indian Premier League tie on Thursday night, will be looking to join the front-running pack when they face leaders Rajasthan Royals on Saturday.

With six points from as many games against Rajasthan’s eight from six, the Super Kings would be pleased as punch at the manner in which they vto win against the Pune Warriors while showcasing their all-round strength.

Skipper Mahendra Singh Dhoni spoke about the need to sustain the winning momentum if the Super Kings hope to remain on course for a berth in the play-offs, but Rahul Dravid’s Rajasthan Royals may not be as easy picks as the Warriors were.

Since taking charge from the retired Shane Warne, Dravid, who recently quit international and first-class cricket, has proven to be an able leader as the Royals promise to go all the way in the tournament if their early form is anything to go by.

As for Super Kings, it has been a typical run thus far with a series of defeats marking their early outings before they got their campaign back on track with a few solid wins that underlined the team’s collective potential.

The South African duo of opener Francois du Plessis and seamer Albie Morkel have been the key figures in the Super Kings ranks with Dhoni himself living up to his reputation of a clinical finisher with the bat.

On Thursday, the Super Kings were without Morkel who was away in South Africa attending a friend’s funeral, but the team covered up nicely for the all-rounder’s absence. However, Dhoni would be happier with a bit more discipline in the bowling backed by some sharp fielding.

As for Royals, Dravid has been the critical figure around whom the team has performed admirably so far. As well as Dravid batted at the top of the order, it has been Ajinkya Rahane who has been a revelation this season with a series of high scores, including a century while totalling 304 runs from six games.

Also lending steel to the line-up are middle-order batsman Owais Shah and all-rounder Brad Hodge, both of whom have displayed good form while providing the side with so many more options.

On paper, the game appears to be a contest between equals, but the Super Kings, given their home record, should be fancying their chances. (IANS)