Defending champions Chennai Super Kings (CSK) would back themselves to defend their Indian Premier League (IPL) title when they take on an equally confident Kolkata Knight Riders (KKR) in what promises to be a thrilling showdown on Sunday. 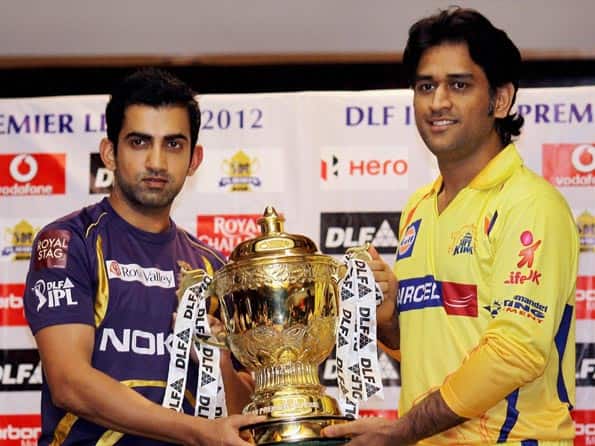 Defending champions Chennai Super Kings (CSK) would back themselves to defend their Indian Premier League (IPL) title when they take on an equally confident Kolkata Knight Riders (KKR) in what promises to be a thrilling showdown on Sunday.

Chennai managed to sneak into the play-offs and then pushed Mumbai Indians and Delhi Daredevils, the most consistent side of the league, out of the tournament.

The experience of playing big matches and the good form of all their batsmen right from top to number eight give Chennai an edge against Kolkata, who will be playing their first IPL final in five editions so far.

Chennai are into their third straight final and the experience of handling pressure situations would stand them in good stead.

Kolkata bowlers, specially, spinner Sunil Narine, hold the key for them since the Chennai batsman are in scorching form.

From Murali Vijay to skipper M S Dhoni to Dwayne Bravo, everyone has started scoring runs and that too at a quick pace. Despite making an average start, they went on to score big in the last two outings.

It will be quite a battle between Kolkata bowlers and Chennai batsman at the MA Chidambaram stadium.

Kolkata skipper Gautam Gambhir has shown a lot of faith in a few players such as Brendon McCullum and Yusuf Pathan.

Despite them not contributing much, Gambhir kept playing them.

The result is that finally Pathan scored a match-winning 40-run cameo in the Qualfier I against Delhi and they found themselves in final.

McCullum has gradually improved but is due for a big knock and the team would expect the Kiwi batsman to fire when it matters most.

Gambhir himself is in good form and final is the occasion when runs from his bat would matter the most. The responsibility of leading the side has made him a better batsman and he would be keen to see that he contributes in the big match.

South African all-rounder Jacques Kallis is another big asset for them. If Gambhir, Manoj Tiwary, McCullum and Kallis fire in unison, they will also be unstoppable.

Chennai would look to stop them with the likes of Ben Hilfenhaus, Albie Morkel and spin duo of R Ashwin and Shadab Jakati. Besides these, they have Ravindra Jadeja, who has also done well with the ball, claiming 14 wickets.

Chennai batsman Murali Vijay was cautious when asked about the final but said his team was ready to fire and they are not taking KKR lightly.

“Every team can beat the other on a given day. So we need to be wary and cannot take things lightly. The only thing I can tell you is that we are geared up for the match,” Vijay, who became only the second Indian batsman to score two IPL hundred, said.

Even the Delhi Dardevils coach Eric Simmons said the Chennai is a team which does not miss out on big occasions.

“Chennai is a very balanced side and they sneaked in to the play off with a mission. They are a tough team balanced in both in the bowling and batting line up. They have eight batsmen and can rotate the strike well. They struggled through the league system but come good at the business end, which is the sign of champions and that is what they are,” he said. (PTI)