Back on home turf after a comprehensive victory in their previous match, Rajasthan Royals would start firm favourites when they take on the struggling Deccan Chargers in an IPL match. 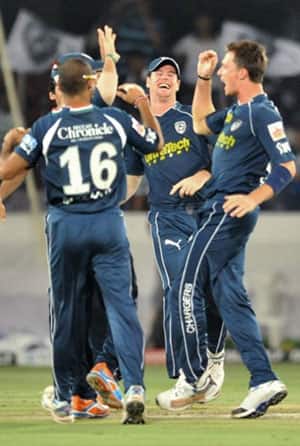 Back on home turf after a comprehensive victory in their previous match, Rajasthan Royals would start firm favourites when they take on the struggling Deccan Chargers in an IPL match.

The biggest positive to be drawn from last night’s win was the cracking form of Rahane and Shah.

Champions of the inaugural IPL, Rajasthan have also benefitted from the experience of their captain Rahul Dravid, who has filled in the void left by Shane Warne quite commendably so far.

Rahane, the orange cap holder for the moment, has been the pick of the batsmen and has emerged as the only centurion so far in the current edition of the IPL.

The 23-year-old impressed with his shot-selection and temperament last night.

Shah, too, has been outstanding and has delivered when the situation has demanded as far as accelerating the run rate is concerned.

Dravid has also been able to forge good opening partnerships with Rahane so far while the rest of the batting comprising Ashok Menaria and Brad Hodge have been Impressive.

Their bowling line-up, which is devoid of any big names, has also been consistent. Medium pacers like Sidhartha Trivedi, Amit Singh, Kevon Cooper and Pankaj Singh have taken their chances.

On the other hand, Deccan Chargers seems to be a team in disarray as they have lost both their matches and their batsmen like Parthiv Patel, skipper Kumar Sangakkara, Cameron White, Darren Bravo and Shikhar Dhawan have not been able to convert good starts into long innings.

As far as bowling is concerned, South African quickie Dale Styen has been impressive but others like Manpreet Gony, Daniel Christian as well as spinners Amit Mishra have been unable to stem the run flow at crucial junctures.

The slight drizzles in past couple of days has made the weather a little humid but while hosts would looking to carry on their winning streak, the visitors who are languishing at the bottom of the table would be aiming to put their act together. (PTI)

Roles of ICC president, chairman to be split from 2014