As the battle to reach the play-off stage in the Indian Premier League gets fierce, Kings XI Punjab find themselves in a must-win situation as they take on tournament-laggards Deccan Chargers at the PCA stadium on Sunday. 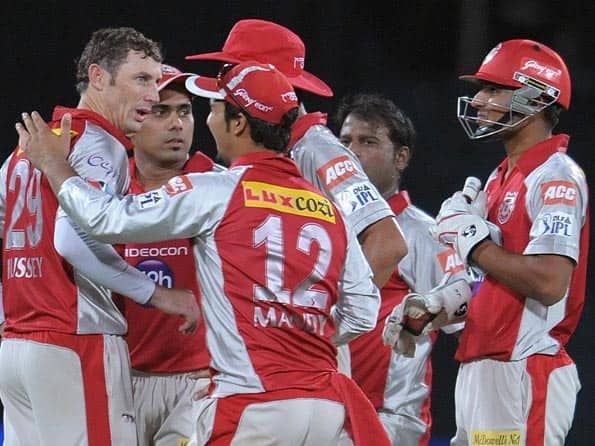 With 12 points from an equal number of matches, Kings XI Punjab, which managed to reach semi-final only once, in 2008, is placed at seventh in the table AFP

As the battle to reach the play-off stage in the Indian Premier League gets fierce, Kings XI Punjab find themselves in a must-win situation as they take on tournament-laggards Deccan Chargers at the PCA stadium on Sunday.

Punjab’s clash with the Hyderabad team may be inconsequential for the Kumar Sangakkara-led team but the local favourites can ill-afford any slip-up at this stage as there is a mad scramble among the teams to seal a berth for the play-offs.

Of the nine teams taking part in the competition, the Chargers have just two wins from 13 games. They along with Pune Warriors, who are currently placed eighth with four wins from 14, are out of the hunt.

With 12 points from an equal number of matches, the Punjab side, which managed to reach semi-final only once, in 2008, is placed at seventh in the table.

While top-of-the-table-team Delhi Daredevils and Kolkata Knight Riders may have virtually assured themselves of a berth in the play-offs, among rest of the five teams — Royal Challengers Bangalore, Mumbai Indians, Chennai Super Kings, Rajasthan Royals and Punjab — the battle has got intense.

Punjab have tough games coming up as they haven’t played Delhi Daredevils yet and will be taking them on in Delhi after Sunday’s match followed by another one at Dharamsala later.

In between, they will play one match against Chennai Super Kings at Dharamsala.

Led by stand-in captain David Hussey, KXIP will have this daunting task at the back of their minds.

They will be high on confidence having defeated the Hyderabad team in their own backyard by 25 runs just a few days back but skipper’s main worry would be Punjab’s poor record on the home ground.

Opener Mandeep Singh has been the prolific scorer for his team accumulating 359 runs so far. Australian Shaun Marsh, former Pakistani all-rounder Azhar Mahmood and young South African David Miller too have shown that the home side’s batting has depth.

Medium pacers Praveen Kumar, Parvinder Awana and Mahmood along with leg spinner Piyush Chawla, who can bat as well, have done a decent job in the bowling department. Punjab’s fielding, too, has improved as the tournament has progressed.

The side has a psychological edge over the Chargers, who suffered defeat not only at the hands of Punjab on May 8 in Hyderabad, but were blown away two days later by David Warner’s unbeaten ton and 64 not out by Naman Ojha of the Delhi Daredevils despite giving the Virender Sehwag-led side a target of 188 to chase.

However, if there is anything to worry for Punjab at this stage is their home record this season. They have managed to post just one win, against weak Pune Warriors, from their five matches played on home soil. Punjab have lost to KKR, RCB, Mumbai and Rajasthan Royals here.

They will look to rectify this record otherwise it can hurt their chances badly. Meanwhile, Sangakkara’s team will be playing for pride and hoping they notch up a win or two from the remaining games to salvage some prestige.

For Sangakkara, Mohali is familiar territory as he had replaced Yuvraj Singh as KXIP’s captain in one season.

The Sri Lankan will be hoping fortune smiles on his team finally and they end the season on a positive note. (PTI)