Buoyed by a comprehensive eight-wicket win over defending champions Chennai Super Kings, Mumbai Indians would be eager to continue their winning momentum when they take on a new-look Pune Warriors in their IPL match at the Wankhede Stadium on Friday. 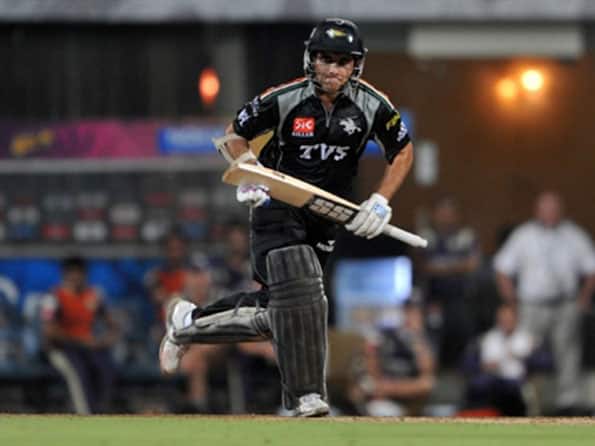 Buoyed by a comprehensive eight-wicket win over defending champions Chennai Super Kings, Mumbai Indians would be eager to continue their winning momentum when they take on a new-look Pune Warriors in their IPL match at the Wankhede Stadium on Friday.

The season opener could always be tricky and the Super Kings found that out at their home venue yesterday, even as Mumbai Indians started on a very confident note and that should give the Mumbai outfit a clear edge in the match against the Sourav Ganguly-led Warriors.

Their bowling and fielding were top class against two-time champions Chennai and it is difficult to visualise a victory for the Warriors if Mumbai can repeat the show.

Harbhajan Singh, who took over the mantle of the Mumbai outfit from Sachin Tendulkar after the latter relinquished it ahead of the start of the tournament, led the team in an aggressive style and that also turned out to be a big bonus.

Two other foreigners, who are expected to play all the games — Sri Lankan Lasith Malinga and West Indian Kieron Pollard — were also in the thick of things with the ball.

The only worry ahead of tomorrow’s game is the finger injury sustained by Tendulkar when he fended at a lifter from leftarm pacer Doug Bollinger and retired hurt.

“It was good toss to win, wicket was quite unpredictable, not the same wicket that we played earlier, all the boys played well and Levi played terrific,” said Harbhajan.

Harbhajan also noted the outstanding work on the field by his team, effecting three run-outs to halt Chennai’s progress.

The Warriors, on the other hand, have a tough task on hands as their key player and last year’s skipper Yuvraj Singh, will be missing, recovering from the treatment for a rare form of cancer.

The man-of-the-tournament in India’s World Cup victory in 2011, Yuvraj had brought the much-needed balance to the outfit with his power-packed batting (343 runs in 14 games) and effective left-arm spin (nine wickets) last season.

Even Australia captain Michael Clarke will also be available only after his country’s campaign ends in the Caribbean on April 27. Also unavailable is Sri Lanka allrounder Angelo Mathews, who is busy representing the island nation in the Test series at home against England.

The wily customer that he is, Ganguly could play only four games last season after joining the squad as a late injury replacement.

He has one good option to fill in for the absent Yuvraj — West Indian Marlon Samuels — who had recently played in the ODI and T20 series against Australia at home.

Samuels can belt the ball hard, rotate the strike besides bowling a tight spell of off spin when needed, apart from being a very good fielder like Yuvraj.

Samuels, with his vast experience, could be the key player for Warriors this time around along with another new recruit, Ashok Dinda, in the pace department. Dinda is a good addition along with the fit-again Ashish Nehra, who missed the entire 2011 season because of an injury.

Bangladesh pocket dynamo Tamim Iqbal, a temporary replacement, should also be a big boost for the team in launching the innings along with home player Robin Uthappa.

The over-dependence on the South African pace duo of Alphonso Thomas and Wayne Parnell was a setback for Pune last year as they started well before going off the boil.

There are other home players like Manish Pandey, who had a decent last season (246 in 10 games), and young wicketkeeper-batsman Mahesh Rawat.

Murali Karthik struggled to get among the wickets in 2011 and the Warriors would be looking forward to an improved effort from this experienced left arm slow.

Lanky leggie Rahul Sharma, who had caught the national attention through IPL last season and also booked a berth in the Indian 50-over squad, would be a key bowler for Pune. (PTI)