A low-on-morale Rajasthan Royals will be looking to make amends when they take on the formidable Delhi Daredevils just 48 hours after losing a close away game, in their Indian Premier League match at the Sawai Mansingh Stadium on Tuesday. 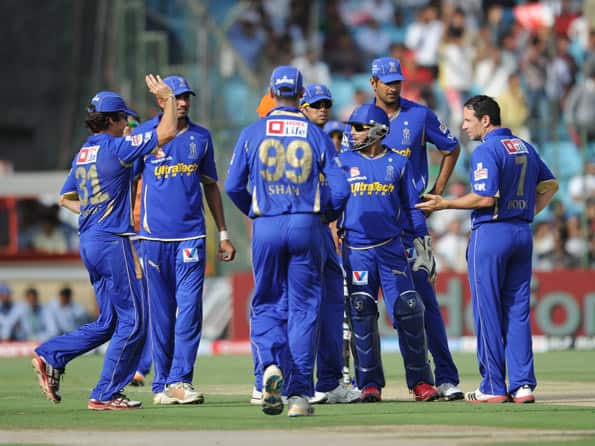 A low-on-morale Rajasthan Royals will be looking to make amends when they take on the formidable Delhi Daredevils just 48 hours after losing a close away game, in their Indian Premier League match at the Sawai Mansingh Stadium on Tuesday.

Rajasthan would be eager to put behind the disappointment of last night’s defeat when the Daredevils pulled off a dramatic one-run win from the jaws of defeat.

The Royals needed to score just 15 runs in the last two overs but Morne Morkel’s penultimate over completely changed the complexion of the match as he gave away just three runs, picking up the wicket of Brad Hodge to turn the tables.

Although the hosts would be hoping for a change of fortunes in their own den tomorrow, the Royals would have to battle it out not just against a strong Delhi outfit in the field but also have to overcome the psychological barrier.

The Royals have lost three matches on the trot and will be looking at Australia’s prolific all-rounder Shane Watson, who would be joining the squad tomorrow, to boost up the morale of the side and put it back on the winning track.

Skipper Rahul Dravid had earlier said that the arrival of Watson would lend balance to the side as he was the mainstay of the Royals’ triumph in the first edition of the IPL.

Watson, in all probability, would be opening the innings along with in-form Ajinkya Rahane and Rajasthan would expect the two to give them a solid start.

Dravid, who scored a quick-fire 40 last night, may just come down the order to provide solidarity to the middle order.

Brad Hodge, Owais Shah and Ashok Menaria, though have been inconsistent with the bat in the middle overs, and would look to get their act together.

The form of wicketkeeper Shreevats Goswami is also under the scanner.

Apart from Kevon Cooper and Siddharth Trivedi, no one has looked consistent with the ball for the Royals. Even as Pankaj Singh (2 for 25) did well yesterday, they will have to fire in unison tomorrow.

On the other hand, the Delhi Daredevils, having won seven out of nine matches, would be looking to carry on the momentum.

The fact that they won last night’s match only in the closing overs would play on their minds and the visitors would be wanting to register a more convincing victory.

The Daredevils are aware of the glorious uncertainties of Twenty20 cricket and would be more cautious against the Royals. (PTI)