All-rounder Shane Watson says that Rajasthan Royals' captain and coach Rahul Dravid has a huge influence on him, and the former India cricketer is the "nicest person in world cricket". 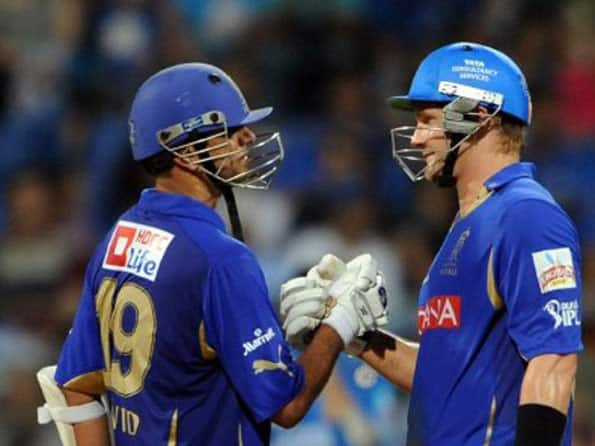 All-rounder Shane Watson says that Rajasthan Royals‘ captain and coach Rahul Dravid has a huge influence on him, and the former India cricketer is the “nicest person in world cricket”.

Watson says, “He is probably the nicest guy I have ever met in cricket. He is unbelievably down-to-earth. He is an extremely lovely man and just loves cricket so much that he if he could, he would play with until the day he dies.”

“I think, he is just been a really brilliant influence on me to just to talk to him about cricket and just the way he has lived his life. He has been a great influence on me just to remain calm through every situation,” said the Aussie player.

Talking about his match-winning knock in Mohali against Kings XI Punjab, Watson said, “It was nice to get out in the middle. I was just very disappointed with my first performance in Jaipur, so it was nice to be able to get out here in the middle [and score runs and take wickets]. It was a very beautiful wicket out there. It reminded me of home actually [with] a bit of pace and bounce [which] helped my bowling a little bit and [got] little bit swing as well. So it was good fun.

Watson believes that shifting from Test cricket to Twenty20 is not very difficult, as it requires more mental adjustment than anything else.

“It normally just takes a couple of training sessions to be able to get your head around exactly what your plans are [for the format] and also making sure that the strokes that you are going to be using majority of the time; you have got them ready to go,” Watson continued.

Watson further added, “It s mainly a mental adjustment that one has to make, but also a slightly technical one. In Twenty20 cricket, for example, you need to have attacking shots [in your repertoire], the boundary shots that you need to go to with if team needs a boundary. Whereas in Test cricket you just wait, wait until you get a loose ball. So you do have to practice a few of those shots. It normally takes a few training sessions to get on the roll.”

Discussing about playing in a side that has comparatively fewer stars, Watson said it is nice to play as underdogs with less expectations. He also believes that the win in the first Indian Premier League (IPL) wasn t a fluke.

“We certainly have got the talent to be able to win another IPL. It is just about bringing it all together. In the first year that we won, we won most of the matches that we got played. Unfortunately, this year, so far we have lost a few really close matches. Hopefully, we can really get on a roll now, but there is no doubt that we have the talent; we just have to bring it all together.”

Talking about what motivates him when chips are down, Watson said, he reminds himself what made him fall in love with the game.

“Just think back to reason why you first started playing cricket and which is because of the pure enjoyment and love of playing. And that s why when you get a little in front of yourself you can forget the reason why you started playing. So [just remind yourself of that]. I certainly haven t forgotten, because I know how quickly it can be taken away from you,” he concluded.