Rajasthan Royals medium pacer Siddharth Trivedi opines that his side likes being called 'underdogs , and feels that the winner of the first edition of the Indian Premier League can create history for one more time. 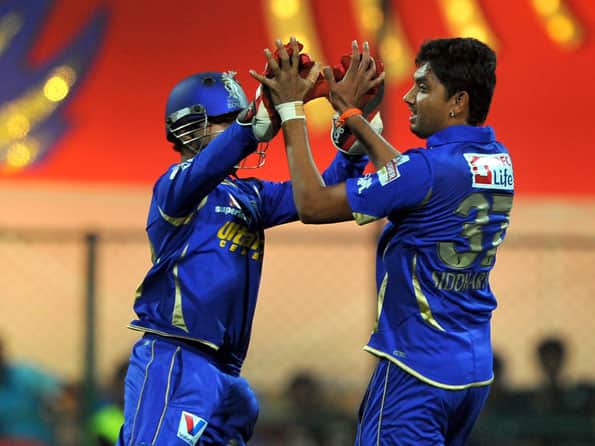 Rajasthan Royals medium pacer Siddharth Trivedi opines that his side likes being called ‘underdogs , and feels that the winner of the first edition of the Indian Premier League can create history for one more time.

Trivedi said, “The ‘underdogs tag was always attached to Rajasthan [Royals] [in the opening season]. We liked being called underdogs. Even this year we have surprised many teams.”

He added, “It is too early to tell but we have been topping the table, which shows that we have the kind of players that are very destructive. We are going to surprise a few of the teams in this tournament.”

The right-arm bowler bagged four wickets in Rajasthan s clash with Bangalore on Sunday, to help his side win the tie by 59 runs.

Talking about the match, Trivedi said, “We kept it simple and stuck to the basics. We had got a good idea about how the wicket was behaving while our team was batting. We have a certain plan and we have certain strengths so we worked on it and got success.”

The Rajasthan bowler said he is trying to develop more variations in his bowling.

“I am more of a variation bowler. I mix my pace depending on the wicket and the batsman that s what I work on during practice sessions too. I have been implementing [my plans] well [and using] slower balls. My length, too, has been much better this year. I am consistently bowling a good line and length so that s why I think I have been performing well,” he said.

Trivedi, who has been a part of Rajasthan squad since the first season of the tournament adds, “Playing with legends like Rahul Dravid, Brad Hogg, Owais Shah [and others helps]. They keep motivating [the juniors] and help us on a few minor points.”

“I have grown as a cricketer and I m enjoying playing the IPL. I hope to carry on the performance in the next games too,” he said.

Trivedi said the experience playing in domestic cricket helps a lot in the IPL. “But at the same time you cannot forget that this is [akin to] the biggest international tournament. We know the wickets are flat but the batsmen you will be bowling too are really tough [to bowl to], so you have to adjust to that.

“You have to adapt to the situation as early as possible and that is what I am trying to do,” he added.