Lanky medium pacer Sidhartha Trivedi, who has been a consistent performer for the Rajasthan Royals since the inception of IPL, is hoping that his good show in the ongoing edition is being noticed by the selectors. 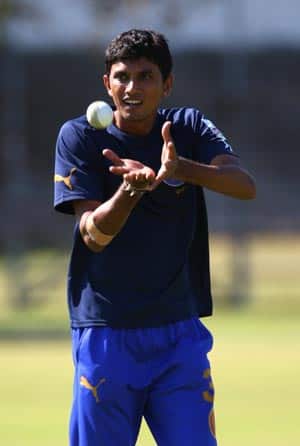 Despite good performances in IPL, Siddharth Trivedi has failed to earn a berth in Indian team Getty Images

Lanky medium pacer Sidhartha Trivedi, who has been a consistent performer for the Rajasthan Royals since the inception of IPL, is hoping that his good show in the ongoing edition is being noticed by the selectors.

“I have been performing consistently and my four wickets against Royal Challengers Bangalore were quite satisfying because they have a very strong batting line up. I hope the performances are being noticed,” said Trivedi.

After making his debut in 2002-03 in first class cricket he was soon picked up for ICC under-19 World Cup in 2002. He was impressive as he grabbed nine wickets in seven matches.

He won the Border-Gavaskar Scholarship to train for five weeks at the Commonwealth Bank Cricket Academy in Australia, and played for India B for the 2003 Challenger Trophy.

The Australian legend Shane Warne had a lot of faith in Trivedi’s abilities and playing true to his captains expectations the youngster proved a vital cog in title triumph of the Rajasthan Royals in the inaugural IPL in 2008.

However, it has not been enough for him to earn a berth in Indian team.

“I have to keep on performing and leave the rest in the hands of selectors. I believe I should finish in top five wicket takers in this IPL. I have been working hard on my bowling and especially the slower ones.

“I depend more on variations and try vary pace and the length as well. A lot of slower ones might have made the batsmen a little wiser and they expect odd one coming down but still they have to play if it is wicket to wicket. This can induce them to make a mistake,” said the bowler, who has taken eight wickets till now at an impressive average of 19.87 with 4 for 25 against Bangalore being best so far this edition.

“The team still has high expectations from me. This is my fifth year in IPL and as a senior player I try to give my 100 per cent. Batsmen now try to shuffle and improvise and that becomes a challenge and I love challenges,” he said. (PTI)

Interaction with seniors during IPL was key to my success in Australia: Chand