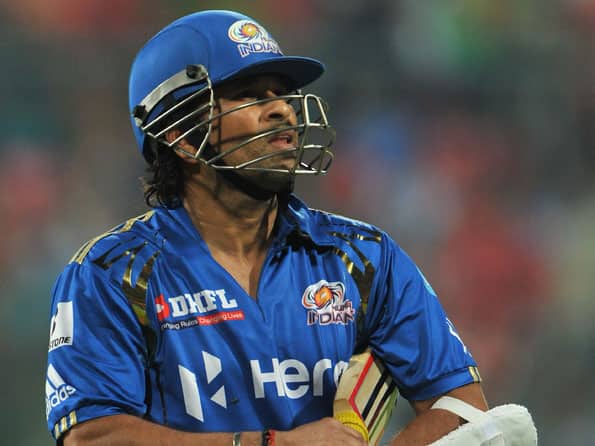 # Mayank Agarwal (64 not out off 30 balls) has registered his career-best knock in Twenty20 – his third fifty.

# Gayle has recorded 44 sixes, emulating his own feat of most sixes in an IPL tournament, achieved for the first time in 2011.

# Kieron Pollard (52 not out off 31 balls) has recorded his second half-century in the IPL – both in the present tournament.

# The 122-run unbroken sixth-wicket match-winning partnership between Rayudu and Pollard is the highest in the IPL.

# Rayudu has deservingly got his fourth Man-of-the-Match award in the IPL # Rayudu has completed his 300 runs in the present tournament, totaling 311 at an average of 44.42 in 14 matches.

# Rayudu (81 not out off 54 balls) has registered his highest innings in the IPL – his second fifty in the present tournament and eighth in the IPL overall.

# Rayudu’s brilliant unbeaten knock is the highest by a Mumbai batsman against Bangalore in the IPL.

# Sachin Tendulkar has recorded his first golden duck – his third in the IPL.

# With 15 points, Royal Challengers Bangalore are placed fifth in the Points table.

# Of the 11 games played against Bangalore in the IPL, Mumbai Indians have won six and lost five out – success per centage 54.54.

# Mumbai Indians have become the second side after Delhi Daredevils to win nine matches in the present competition.

# Mumbai Indians, thanks to their win over Bangalore, are placed second in the points table.