IPL 2012: T20 is not all about swashbuckling cricket, says David Warner

IPL 2012: T20 is not all about swashbuckling cricket, says David Warner

Destructive Australia and Delhi Daredevils (DD) opener David Warner said that he Delhi is like his second home. 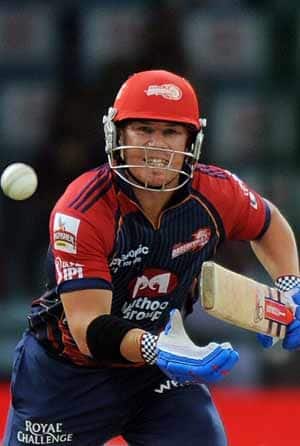 Destructive Australia and Delhi Daredevils (DD) opener David Warner said that he Delhi is like his second home.

He is keenly waiting to open the innings with DD skipper Virender Sehwag.

“I am pretty sure I ll be opening up with Viru and will try to continue the success we have had in previous years. Be it me or Mahela batting up the order, it s going to be an opportunity for either of us to keep scoring runs for Delhi.”

Following the tour to the West Indies, he has joined the Delhi team in this year s Indian Premier League (IPL) adding to their positive wave of good performances.

“As you know I have been playing for last 12 months. I don t think I m struggling. I m playing good and seeing the ball pretty well,” the Australian opener said

“As an athlete you got to adjust right away. I ll be playing my natural game from ball one on Monday and I m looking forward to get into the thick of things. Hopefully we will keep going forward and win the first one for us,” Warner was quoted as saying in the official website of Indian Premier League.

Over time, Warner has adjusted his game and curbed his natural instinct in order to get the better of the opposition bowler.

Talking about his rather uncharacteristic batting against the West Indies, Warner said, “I am pretty sure if I face 130 balls in a wicket like that at WACA or a Sydney wicket I ll be close to 100. But for the situation and circumstance in that Test match, I had to knuckle down as it was very hard to score.

That makes me mentally strong. Everyone says if I get a straight ball I ll play a rash shot but that’s not me anymore. I have worked hard to establish myself as a Test cricketer and I am doing good at the moment.”

“My approach is always the same in any format of the game. T20 people think it s all about swashbuckling cricket and keep hitting every ball for four or six but it s actually strategy, you got around 120 contests to think about,” he clarified.

“You got to try to beat the bowler as much as you can and you are trying to get a run of every ball and that is exactly what I ll try and do. Obviously in test cricket you got to pick the right ball, but now I am back to T20 cricket and I am looking forward to continue scoring runs for Delhi,” Warner concluded.