Royal Challengers Bangalore (RCB) captain Daniel Vettori is revered cricketer around the world and enjoys respect of players in his the Bangalore franchise. The former New Zealand captain feels India s batting sensation Virat Kohli, apart from being a talented batsman, can also be a good captain, whenever he gets a chance. 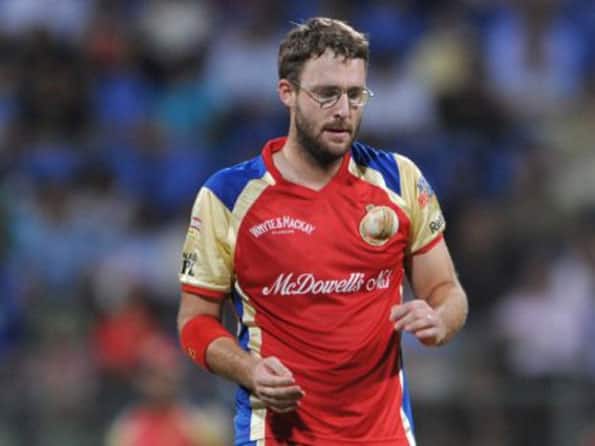 Royal Challengers Bangalore (RCB) captain Daniel Vettori is revered cricketer around the world and enjoys respect of players in his the Bangalore franchise. The former New Zealand captain feels India s batting sensation Virat Kohli, apart from being a talented batsman, can also be a good captain, whenever he gets a chance.

He said,” To succeed at this level, you need to be highly skilled. And Virat is highly skilled. Secondly, he has the confidence and thirdly, he is one of the most competitive players I have played with. When you put that package together, it generally means you are going to be successful.

“As long as he remains competitive and confident, which I have no doubt he will, he is going to dominate attacks in the IPL and around the world.

“I think it s the same [quality that he brings] as a player. He is a confident, competitive guy. Those are great qualities to have as a captain. When your players see that you care so much, you try so hard, it sets an example.

“That s what Virat does not only with his batting, but also with the standard that he sets in the field. When he gets the chance he will captain the team. “

Vettori feels the IPL has gone from strength to strength since its inception in 2008. He was quoted IPL s official website as saying,” Like anything else, it matures and things get better with age. First of all, the play on the field has got better and better.

Vettori disagrees to the criticism that RCB is a team of individual talent, and that it falls short as a unit. “No, because first you have to make two finals. I think anyone can win on the day, but winning consistently over the tournament is the most important thing,” he said.” We finished first in the round robin last year and then did well in the Champions League [Twenty20 2011]. We were very disappointed not to win either of those competitions, but it s a one-off game and those things can happen.”

Vettori feels having an experienced campaigner in form of Anil Kumble has helped the younger players immensely.

He said,” There is a normal coach-captain relationship. Ray takes complete control of all the off-the-field scenarios training, net practices are all the domain of the coach. On the field it is up to me as it is with a normal captain. Anil and myself try to get around the players as much as possible in between games and talk about roles, talk about understanding what you need to do in each game.

“Because Anil has such respect from all the players, he does that so well. It allows Ray to coach and make sure that everything runs smoothly.”

He said,” Both of us are very different bowlers. Murali is probably one of the most knowledgeable guys that I have met in cricket. He loves the game. When you get guys around cricket who ve played for so long and still love being involved and talking about it, you can t help but enjoy it. It s almost contagious.

“It s just nice, I suppose, to play with him as opposed to playing against him, because when you play against him you are pretty nervous having to face him. Now in the nets you can have a bit of fun. Even if you get out, it doesn t matter. “

Vettori also shared his secrets of maintaining a good economy strike-rate in T20 cricket. ” The key to left-arm and right-arm off spin bowling is very simple, but it has to be precise. While [the batsman] may know what is coming, if you can still put the ball in the right areas, at a different pace, at a different trajectory, time and time again, you can confuse the batsman and keep him off what he is trying to do,” said Vettori.

Vettori feels it s better to leave explosive batsmen like Chris Gayle, Kohli and AB de Villiers to play their natural games than to tamper their style of playing by offering them suggestions of curbing their natural instincts.

He said,” I think Chris would respond to it, but I don t think we would ever ask him. That s why he has been so successful and so consistent. He is trained to play that way. It s a skill. It s not reckless; it s not him taking chances. It s just his natural game.

” And that s the best thing about players like Gayle, Virat and AB de Villiers. They play their natural game and that s when they are at their best.”

Vettori feels one of his achievements as RCB captain would be to lift the IPL Trophy. He said,”I think being captain [of the side], it would be a great achievement. Anytime you can be involved with the team as a captain and lift the trophy is what you live for. “

Vettori says he enjoys coming to India as a player and personally finds people very similar to his countrymen. He said,” India is so different from New Zealand. It s difficult to explain to people back home the style of life and the number of people as compared to New Zealand. Just the contrast is what everyone enjoys.

“New Zealand has four million people and India has got a billion, so it is an eye-opener for a lot of guys coming here for the first time. But once you acclimatise, you start to enjoy it. And I think New Zealanders and Indians are very similar, very humble and have an ability to get along with just about anyone.”