Delhi Daredevils bowling coach Eric Simmons said the presence of Australian all-rounder Shane Watson in the Rajasthan Royals' playing XI will make a massive difference to the struggling side. 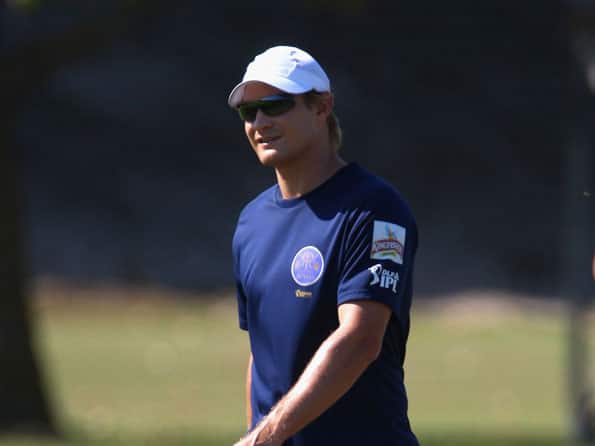 Delhi Daredevils bowling coach Eric Simmons said the presence of Australian all-rounder Shane Watson in the Rajasthan Royals’ playing XI will make a massive difference to the struggling side.

Rajasthan have lost three matches in a row, including last night’s thriller in Delhi, and their job to qualify for the play-offs has become quite tough.

Simmons felt Watson, who is coming to IPL-5 after their series against West Indies, would surely make his presence felt.

“All the Australian cricketers are good and would be important for their teams. They contribute off the field too.

David Warner with his striking capabilities will make us stronger and Michael Clarke as a pure batsman for Pune Warriors but for Rajasthan Royals, Watson would make a massive difference with his all-round capabilities,” Simmons said.

“He can bat and bowl and in fact is as good as two cricketers. He also brings with him the experience, confidence and the information which would be useful for the team.”

Simmons also informed it is still time that Warner joins them.

“We will have to wait for Warner as he has flown back to his country as he wanted a break to be with his family. He would be playing for us on May 7 against Kolkata Knight Riders. But I am not sure we could have included him for this match even if he was available,” he said.

Talking about the narrow victory over the Rajasthan last night, Simmons said, “It was a very close affair. In fact we did not win it but the Rajasthan Royals lost it. Like what Dravid said that they should have finished it earlier. Things should not be allowed to a point where one good over, a four here or a wicket there can make all the difference.”

Heaping a lot of praise on Ajinkya Rahane the lanky coach said that he had a very good idea about the talent of young Indian batsman.

“It was his fifty against England when he played for India and there I felt he had special talent. He has the heart and in Dravid’s company he has grown in confidence. He hit a marvellous six after Morkel had turned the tide.

“He has good technique, sound mind and most important is the character. In the nine matches he has played, in this IPL he has shown a lot of character. He has played a lot of inside out shots over extra cover. We analyse and work out strategies for such things before the match and would do so this time too,” he said.

Simmons also said there was no need sound alarm bells just because they were on the verge of losing last night’s match against Rajasthan.

“We have played quite consistently and have a strong side. I don’t feel there are any particular areas we have to improve on. It is all about momentum. We could have 20 more runs on the board. We will have to win one ? two more games for the playoffs.

“I feel CSK is the most balanced side but of late they have not played up to their potential. Kolkata Knight Riders and Royal Challengers all have match winners in their ranks,” he said.

Talking about the IPL he said that it was a dynamic place to work.

“It is about learning all the time. I love the format as it throws difficult challenges. But it has helped India develop nucleus of about 50 young hardened fine cricketers.” (PTI)