Kings XI Punjab senior player David Hussey feels it is high time for the batsmen to put a price tag on their wicket and not get out cheaply playing loose shots. 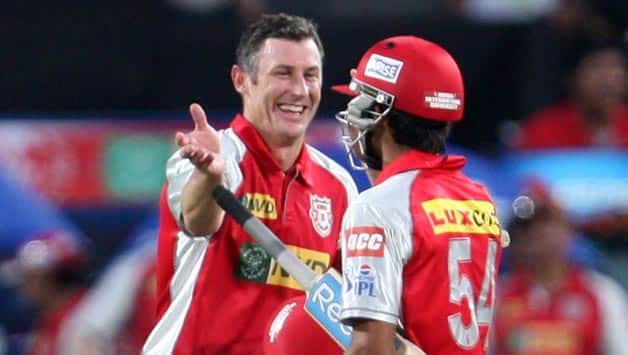 Kings XI Punjab senior player David Hussey feels it is high time for the batsmen to put a price tag on their wicket and not get out cheaply playing loose shots.

“When you are four down with four overs to go, you think you will post a big score but we keep getting out in poor ways. We have really got to learn and rectify that problem straight away, or it’s going to be a very long tournament for us,” Hussey told IPLT20.com.

Hussey is also upset that none of the Kings XI batsmen have managed a half-century in the five matches so far.

“Yes, there is a bit of a talk. No batsman from our team has yet scored a fifty and we have to change that very soon. We have the batsmen to do that. The way Adam Gilchrist batted [against Sunrisers] I thought he’s going to be one of our better batsmen going forward in the tournament,” he said.

Asked if it was time for him and Gilchrist to lead from the front with performance, Hussey said: “Yes, it is. We really need to get those big 50s and 70s and give our bowlers a decent total to bowl to. The bowlers have been fantastic and now it’s up to the batsmen to put their hands up.”

Hussey also said that he is fielding captain of the team and it is his responsibility to get the best out of the fielders.

“Yes, I am. I am the captain in the field and it’s my responsibility to get the best fielders in the right positions. It’s up to the bowlers to bowl whatever they want to and it’s then our job to create an atmosphere and cause a few run-outs,” he said.

When asked if his is elder brother Michael, who is playing for Super Kings, is also catching up with him as a T20 specialist, Hussey said: “He’s a fantastic cricketer in all three formats. I watched him last night play against Delhi Daredevils [where he scored a 50-ball 65] and he batted superbly. I hope he keeps doing well but CSK keep losing games. That would be nice.”