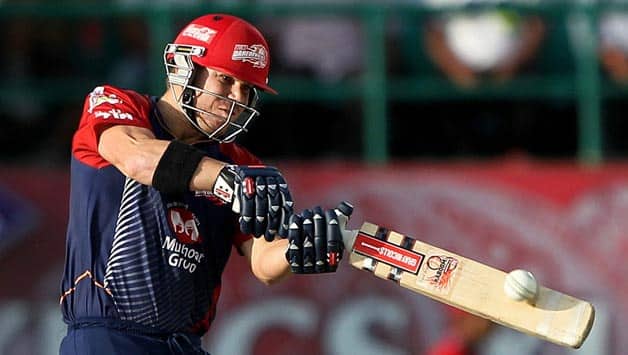 Warner top-scored with 77 runs, but Delhi fell short of the target by five runs against Rajasthan Royals © PTI

“We paced the chase pretty well as couple of guys got settled. That’s why we sent in Russell as David (Warner) was batting well. But he (Warner) got run-out and that became the turning point. They held their nerves during the last 10 deliveries and we did not do so,” Jayawardene said at the post-match press conference.

“Just like we won a close game last year, it has been the other way round this year. It’s one of those games that we did not manage to finish,” he said.

“Don’t write us off. Lot of teams will have tough matches. Once the tournament gets into the final stage, there will be a crucial fight for the last 2-3 places. Obviously, you get a bit of momentum if you win early,” he said.

There was no clear indication about the match from which Virender Sehwag will be available.

“Obviously, you miss some one as experienced as Viru, who can change the game. He has had a positive progress so far and we are taking one day at a time. We don’t want to rush his comeback as it won’t be fair if he plays one game and then miss next three. The idea is to get him for the better part of the season,” said Jayawardene.

The skipper praised his pace trio of Irfan Pathan, Ashish Nehra and Umesh Yadav as all of them were coming back from injuries and yet put up a spirited show.

“Our death bowling — during the last four-five overs — was good. We stuck to our guns and bowled in good areas. I was thinking that we might have to chase 190-195 but those last few overs got some momentum back in our favour,” he said.

Jayawardene is still recovering from a fractured finger on his right hand and that has remained heavily taped.

“Batting-wise I am fine but while fielding, I have to remain a bit careful to ensure that I don’t get hurt,” he said.

Asked about the combination of four overseas players, Jayawardene said, “I can’t say anything about the guys. All of them tried their best. It’s easier to say in hindsight when you lose. But with Morne (Morkel) coming in a few days and Ben Rohrer joining the side today, we do have some options.”