Even as preparations are on at the Salt Lake stadium for the opening ceremony of the upcoming IPL T20 extravaganza, defending champions Kolkata Knight Riders on Tuesday, began the countdown with the season's first practice session at the Eden Gardens. 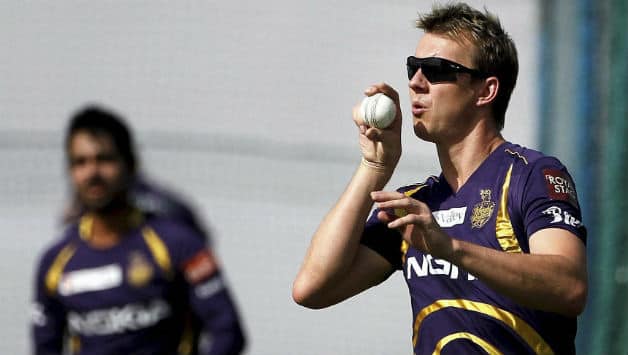 Even as preparations are on at the Salt Lake stadium for the opening ceremony of the upcoming IPL T20 extravaganza, defending champions Kolkata Knight Riders on Tuesday, began the countdown with the season’s first practice session at the Eden Gardens.

Captain Gautam Gambhir, who is down with jaundince, did not attend the session and assistant coach Vijay Dahiya was seen playing the role of the mentor to the likes of Rajat Bhatia, Pradeep Sangwan and Manvinder Bisla.

“Being the defending champions, we all are motivated to repeat our performance. We all are keen and united to do well,” Bisla told reporters after the practice.

The 120,000 capacity stadium, also known as the Yubabharati Krirangan, will host the opening ceremony that will begin at 7.30 pm on April 2, the eve of the first match between Kolkata Knight Riders and Delhi Daredevils,at the Eden Gardens.

A huge podium is being erected, while the artificial turf is being covered with a rubber mat, where the artists will perform during the opening ceremony.

“We are taking all precautions so that the astroturf (used for football matches) is not damaged,” state Sports Minister Madan Mitra said after an inspection.

The state government, meanwhile, has formed a 40-member committee for the development of the stadium.

As the organisers were busy redoing the stadium, many artistes were seen rehearsing their moves in the galleries.

Shah Rukh Khan, KKR principal owner, will perform along with his Jab Tak Hai Jaan co-star Katrina Kaif, while rapper Pitbull will add the international touch to the ceremony.

The opening ceremony would begin with a traditional welcome as a huge balloon carrying the IPL Cup would descend on the stadium while the acrobatic artists perform.

In a segment, titled ‘The IPL Universe’, the nine teams will be seen as planets and huge balloons will be seen as there would be flying drummers, Chinese percussionists, and fireworks apart from performances of Shah Rukh and Katrina.

“The Opening Ceremony of the Pepsi IPL 2013 will be as outstanding as the cricket that we will witness over the subsequent seven weeks. We are in for a spectacular commencement to what promises to be a memorable tournament,” IPL Chairman Rajeev Shukla said.

Rajasthan Royals were the first champions in 2008 while Deccan Chargers won the title in 2009, when the tournament was played in South Africa.

Chennai Super Kings triumphed in 2010 and 2011, and Kolkata Knight Riders scaled the summit in 2012.

In the sixth season, nine teams will battle it out in a total of 76 matches, over a period of seven weeks.

The final will be played on May 26 again at the Eden Gardens.