The depleted Delhi Daredevils are yet to register a win this season but Manpreet Juneja believes it is too early to write the team off and they will bounce back. 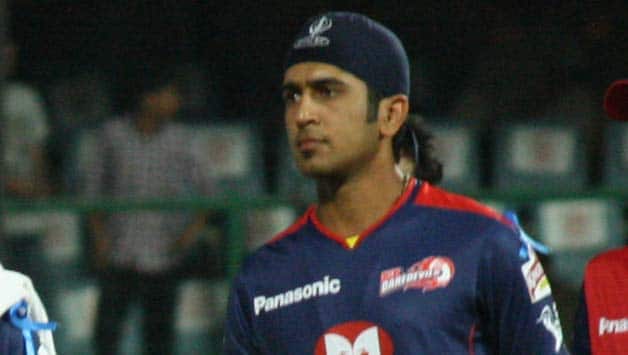 The depleted Delhi Daredevils are yet to register a win this season but Manpreet Juneja believes it is too early to write the team off and they will bounce back.

“It happens. It’s cricket but we have faith in ourselves and we believe we will bounce back,” Juneja told reporters at the post match conference after his side’s 44-run drubbing at the hands of Mumbai Indians.

The Delhi franchise, three losses out of three matches so far, missed the services of swashbuckling opener Virender Sehwag once again and Juneja informed that the senior player is still recovering from back spasms.

“Viru pa [Sehwag] is still recovering. He seemed fit but he is not 100 per cent yet. He didn’t want to get into the game without being 100 per cent [fit],” Juneja said.

Chasing a mammoth 210 runs for victory, the 22-year-old made 49 off 40 balls and consolidated the Delhi innings with Australian David Warner, after his team lost two quick wickets.

Juneja termed Warner’s dismissal as the turning point in the match as the duo was scoring runs at a brisk pace till the fall of the Australian’s wicket.

“I think when Warner got out, from there we couldn’t get our momentum back. But David and I had a decent partnership,” the youngster said.

Warner, who has been in good touch this season, struck five fours and four sixes in his 37-ball 61 as he forged an 82-run stand with Juneja for the third wicket.

Asked what he has learnt from observing players like Warner, the Gujarat-born player said, “He [Warner] has a different game and I have a different kind of a game. But he strikes the ball pretty hard and pretty well, he is very balanced.”

“That is what you get to learn from these players to stay balanced and it is little bit of technical stuff and mental aspect that comes along when they take the target and how they break it into small parts.”

Delhi conceded 42 runs in the last two overs but Juneja defended the bowlers and said it was a case of batsmen hitting good shots rather than a poor bowling performance.

Asked if the onslaught from Dinesh Karthik and Rohit Sharma put the team on the backfoot before the run chase commenced, Juneja said, “Actually it got us psychologically up, because we realised it is a really good wicket to bat on. So, we were very positive when we were going onto bat, yes of course it was a massive target but we did go in very positively.”

“We were chasing a big target. So we just had to be positive. They also lost two quick wickets and they recovered from there. So it was all about recovering from there and how well you could take it [to the end] for as long as possible,” he added.

On his IPL experience, he said, “Last year when I used to sit out, I used to think how it would be to play in such an atmosphere. But once you get in, the level of concentration, the game is so high on tempo that everything else goes blank.  It was nice. I had fun.”