Having suffered early setbacks, Mumbai Indians recovered brilliantly to post a mammoth 209 against the Delhi Daredevils in an Indian Premier League (IPL), 2013 encounter. The Wankhede Stadium in Mumbai was lit up with a sterling performance by Dinesh Karthik, which emphatically brushed off the pressure and got his side back on track. 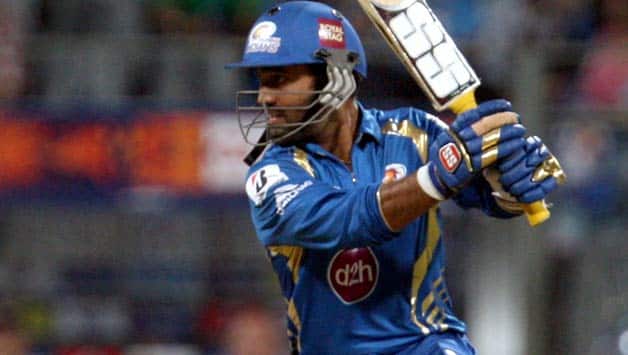 Having suffered early setbacks, Mumbai Indians recovered brilliantly to post a mammoth 209 against the Delhi Daredevils in an Indian Premier League (IPL), 2013 encounter. The Wankhede Stadium in Mumbai was lit up with a sterling performance by Dinesh Karthik, which emphatically brushed off the pressure and got his side back on track.

Karthik’s innings of 86 was a great exhibition of batting on a surface that had some bounce for the pacers. Rohit Sharma scripted a well paced knock to anchor the innings all along.

Mumbai got off to another poor start as Irfan Pathan had Ponting in all sorts of trouble in the first over. The Australian played five dot balls and tried to break the shackles off the last delivery. However, he only managed to give mid-off an easy catch.

Then Sachin Tendulkar was run-out in the next over as Mahela Jayawardene found him short with a direct hit. Karthik had driven to mid-off and Tendulkar was backing up too far. Both the openers were back in the hut with a solitary run on the board.

Following the two early strikes, Karthik too centrestage as he got off the mark with a square cut for four. He then welcomed Morkel to India with a lovely cover-drive off the South African’s first delivery of the tournament. Morkel troubled him for the rest of the over, but Karthik managed to find the boundary off the last ball as Pathan misfielded at third-man.

Rohit took his time and struggled to get off the mark even as Karthik looked in good touch. In the final over of the powerplay, Karthik pulled Ashish Nehra for a six over fine leg and then flicked him off the pads for four off the next ball. He then hit another four through mid-wicket to finish the powerplay on 38 for two.

It took Rohit 10 balls to get off the mark as he flicked Morkel though mid-wicket for a single immediately after the powerplay. Mumbai’s fifty came up in the seventh over as Rohit edged Morkel and it carried for a six over third-man. The ball was actually a free-hit as Morkel had overstepped off the previous.

Karthik was in a different zone all together as he not only played the powerful strokes, but also showed deft touch. The short ball wasn’t troubling him as he pulled with ease to the boundaries. In the ninth over, Umesh Yadav bore the brunt of this twice. Karthik completed his fifty off 29 balls in the same over with a brace. With Umesh straying on the pads, he was flicked through square leg for another four.

At the half-way mark, Mumbai had recovered well to reach 80 for two with Karthik leading the way. There was no stopping him as he continued to play the aggressor. Jeevan Mendis was delicately guided for four through third man and Shahbaz Nadeem was swept with disdain for six. Nadeem was smashed for four through covers in the 12th over to bring up Mumbai’s 100.

With Karthik stealing the limelight with all the hitting, Rohit joined the party with a inside-out six over cover off Mendis. He was still moving along gradually as Karthik was in great flow at the other end. Even Pathan was pulled twice for four in the 14th over. Rohit then took on Morkel in the 15th as he edged one to the boundary through third-man and then moved across his stumps to scoop one through fine-leg.

Such was Karthik’s touch that one felt that he would race along to his hundred. But, Morkel had him caught in the covers. The Wankhede stood up to applaud him as he walked back to the pavilion. The innings had truly lifted Mumbai out of a muddle and given them a platform for an assault in the slog overs.

The stage was set for Rohit and Kieron Pollard to attack. The big hitting West Indian made his intentions clear when he bludgeoned Umesh Yadav for a huge six over long-on.

As Rohit shifted gears in the slog-overs, he got to his fifty off 42 balls. Nehra ended Pollard’s short cameo as he smashed the ball straight down cover’s throat. Two and a half overs were left and Mumbai still had Rohit in the centre with Rayudu joining him.

The penultimate over of the innings went for 22 as Rayudu tore apart Pathan. The left-armer was smashed for two fours and two massive sixes as it was Rayudu’s chance to attack.

Nehra had Rayudu caught pulling off the first ball of the final over, but the batsman had done his job with a magnificent 24 off eight balls. The onslaught continued though. Rohit smashed the next ball through covers for six and then pulled into the stands at square leg to being up Mumbai’s 200. He then finished the innings in style with another maximum.

From a position of one for two, Mumbai have been fantastic to get to their final score. Delhi now have a huge task of chasing 210, which would be difficult considering the fact that they don’t have Virender Sehwag