As the curtains go up on a mix of cricket and culture at the opening ceremony of the sixth edition of Indian Premier League (IPL) on Tuesday, fans of cricket and Bollywood lined up at the Salt Lake Stadium's gates since early morning Monday to claim their share of tickets of the inaugural event. 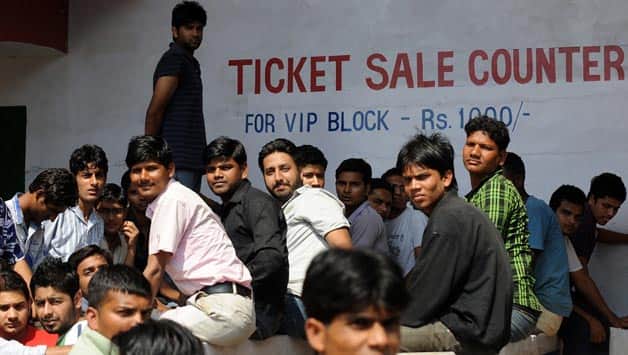 As the curtains go up on a mix of cricket and culture at the opening ceremony of the sixth edition of Indian Premier League (IPL) on Tuesday, fans of cricket and Bollywood lined up at the Salt Lake Stadium’s gates since early morning Monday to claim their share of tickets of the inaugural event.

Battling soaring temperatures, cricket and film buffs queued up at two of the gates of the venue in the satellite township since 8 am — some even taking a day-off from work — to ensure a seat at the gala opener that sees Bollywood megastars Shahrukh Khan, Katrina Kaif and Deepika Padukone shake a leg.

“I have taken a day-off from work just so I can get the tickets booked online. I want to be sure I get to see my favourite stars in action. I am here since 8 am,” an employee of an insurance company Aritra Ghoshal told IANS.

Similarly Raj Agarwal, a college student, bunked classes to collect the passes for himself and friends.

“Since I live in the vicinity, I decided to collect the passes. I have bunked my classes as I don’t know when my turn will come. I am more interested in the cricketers than the stars,” Agarwal told IANS.

The meandering queue that stretched over a kilometre included eager children and adults alike.

“I have brought my kid with me to collect the tickets as he too was excited. This is just the ticket booth yet he loves every experience of it,” city-based merchant G Gupta told IANS.

As the crowd milled around the booth, roadside kiosks selling packaged water and refreshments did brisk business.

“We are stocking up on refreshments for the next few months. This will be a big opportunity for us to make money from a single event,” a kiosk-owner told IANS.

Labourers sweated it out in the scorching mid-afternoon sun to put up giant wooden frames around the gates, splashed with the IPL logo.

“There is a lot of work left. Because of the heat, the progress is slow,” a labourer told IANS.

Braving the sun, wood-cutters were busy trimming and beautifying the trees surrounding the stadium. A stroll inside the perimeter revealed vanity vans and power units, parked bumper-to-bumper with the evening setting the stage for dress rehearsals with the stars.

Sound boxes and megaphones have been positioned at vantage points in-and-around the stadium boundaries that will enable residents of the neighbourhood to get a slice of the action. However, Rajeev Ghosh, a Salt Lake veteran, complained.

“It will not be easy on the ears for us,” Ghosh told IANS.

Policemen manning the stadium were seen keeping a strict vigil on the crowd and cab drivers bringing in more people to the elliptical playground.

M. Singh, a cabbie feared that barring the first few days, business will go down during the IPL season.

“It is actually the reverse of what people think. Everybody will be indoors to watch the matches, which means lower number of passengers for us,” Singh told IANS.