Kings XI Punjab may have won just five of their eleven games so far, but coach Darren Lehmann feels the team has been doing 80 per cent of things right but luck has often eluded them at crucial junctures. 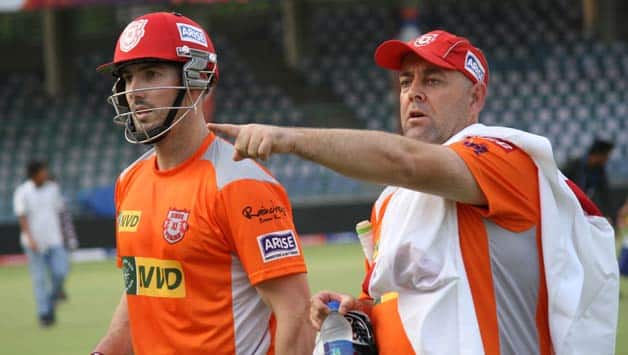 Kings XI Punjab may have won just five of their eleven games so far, but coach Darren Lehmann feels the team has been doing 80 per cent of things right but luck has often eluded them at crucial junctures.

“We have probably played well, 80 per cent of the time in most games,” 43-year-old Australian said addressing a news conference today at the team hotel in Chandigarh.

KXIP, which had its practice session at Sector 16 cricket stadium in Chandigarh today, will meet Rajasthan Royals in a crucial encounter at Mohali on Thursday.

Lehmann said they now need to win the remaining five games and make sure they get the remaining 20 per cent of things going right.

Playing on their home turf, KXIP defeated formidable Royal Challengers Bangalore the other night, with young South African import David Miller hitting a sensational 38-ball unbeaten 101 to help his team chase down a stiff target of 191.

Aware of his team’s strength as they have won more home games, Lehmann said,”We won an away game and rest are at home, we need to make hay while the sun shines.”

Lehmann, who has previously turned out for the Rajasthan Royals and erstwhile Deccan Chargers, saw inconsistency in the batting department which the Punjab team needs to sort out.

“We have got the batters to win the tournament, there is no doubt about that. We’ve just got to make them make bigger runs. If you look at someone like David Hussey, who has been getting lot of 20s and 30s and he is an experienced T20 player, so we would expect him to get couple of big scores.

“If he comes good at the right time and [with] Adam [Gilchrist] at top of the order or [Luke] Pomsersbach or young Mandeep [Singh], if they can start to click, those probably top four then all of a sudden you got some power and punch in the batting order, that’s probably what we have lacked,” he said.

“The local Indian boys are doing a really good job. I think PK [Praveen Kumar] has been fantastic for us opening the bowling, swinging the ball around and obviously finishing the innings.

“I think PC [Piyush Chawla] has really improved as the tournament has gone on, and in the last couple of games, he has done a good job. (Parvinder) Awana has been outstanding for us in the whole tournament and [Manpreet] Gony has got some vital wickets for us.”

Asked about Miller’s performance and how crucial it is for the sides batting, he said,”Miller has been fantastic.”

On regular skipper Adam Gilchrist‘s form, he said,”He hasn’t played the last couple of games. He is a very fine captain and [wicket] ‘keeper and if he can get some form and runs, he is valuable player.”

The out-of-form Punjab captain has dropped himself and has been replaced by David Hussey, but Lehmann indicated that veteran Gilchrist could be back soon at the helm.

On KXIP promoting a lot of young domestic talent, Lehmann said,”We have given the youth a chanceyou gain that experience and become better players as each year passes by and I suppose with that, you got to have a little bit of luck along the way.

“I think we played really well, to be honest, barring a couple of games, but we havent had as much luck as you hope to getwe have to play well in each and every game and thats we are trying to do.”

On the previous game against RCB, he said,”We did very well the other night. If (Chris) Gayle had kept going, we could have been chasing 220-230, they were good conditions to bat on(we are doing 80 per cent right and) getting that final 20 per cent would make it lot easier, obviously.”

Asked how his team rates the opposition Royals, he said,”They have played really well. We just have to do well in what we are doing. As I said before, we just have to make sure we get that 20 per cent going tomorrow against the side that is in top form.

“We have to beat those sides to qualify. There is a lot of planning that goes in behind the scenes and really keeping their major players quiet is going to be a big thing for us.”

“I think they are pretty good team unit, to be fair. They have had the same side for a while now and Rahul Dravid has done a really good job with the side.”

He also indicated possibility of a few changes in his side for Thursday’s game.

On what his team plans would be to target the classical openers which the Royals have in the shape of skipper Rahul Dravid and Ajinkya Rahane, he said,”they are classical batsmen, they play good shots, the challenge for us is to bowl in good areas and put them under pressure.”

Asked to draw comparisons between Miller and Chris Gayle, Lehmann joked, stating,”He [Gayle] is a lot bigger than Miller.”

He also added,”I actually enjoy watching Gayle play and the things they [and Miller] do and the power they have.

It’s not just these two, but a lot of players today have more power than we had in our day. These guys are hitting 20-30 rows back.”