Kings XI Punjab chased down their target of 100 in just over 12 overs to record their first win of IPL 6 against Pune Warriors. 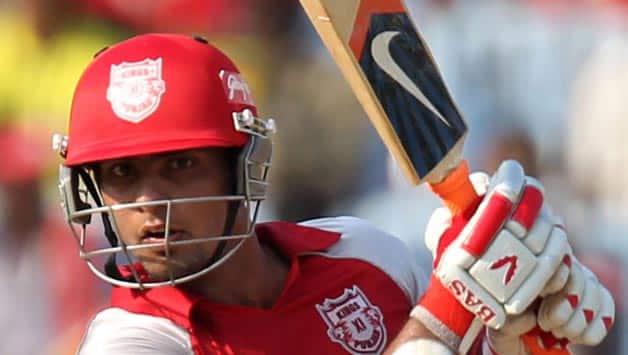 Kings XI Punjab chased down their target of 100 in just over 12 overs to record their first win of IPL 6 against Pune Warriors India.

The city of Pune consists of many narrow streets with one-way traffic, but it all seems to have diverted along the Pune-Mumbai Expressway, particularly to the Subrata Roy Sahara Stadium where KXIP rushed their way to an emphatic eight-wicket win.

Opening their innings with skipper Adam Gilchrist and Mandeep Singh, Punjab were off to a flier. Gilchrist, who retired from international cricket five years ago, showed no signs of any wear and tear as he thrashed Bhuvneshwar Kumar for 14 runs off the very first over, including a shot that took the crowd back in time.

Manan Vohra joined Mandeep in the middle as Punjab wiped out half of their chase in just 27 balls, racing along to 50 for one. Twenty-one of those runs came in one over from Ashok Dinda, which included five overs. Mandeep and Vohra looked in a hurry to finish off the formalities and check out the Pune night scene.

In the end, it was a stroll in the park for the Kings XI, helped by some shoddy work in the field from the Warriors. Two sitters were dropped in the field off Mitchell Marsh’s bowling, first by Dinda at mid-off and then by the usually safe hands of Ross Taylor at first slip.

Nothing went right for Pune since Ball 1 and they would do well to forget this match like a bad dream and start fresh against the Rajasthan Royals on April 11. Punjab, meanwhile, will be pleased with their start to the tournament and would like to carry the momentum forward into their next match against the Chennai Super Kings in three days’ time.

Man of the Match: Manan Vohra