Sunrisers Hyderabad captain Cameron White has won the toss against the Chennai Super Kings and has elected to bat first at the MA Chidambaram Stadium in the 34th match of the Indian Premier League (IPL). 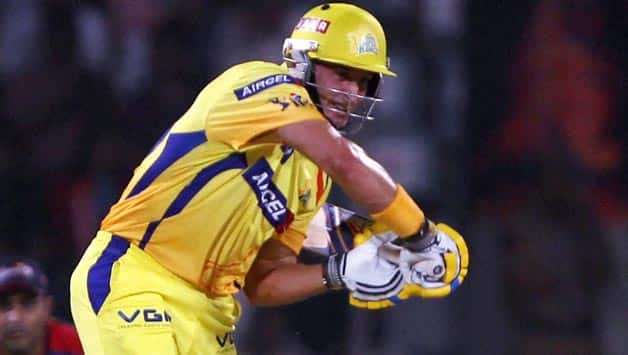 Ashish Reddy comes on to bowl his first over, which is the last over of the match with his side defending 15 runs! Drama! And he starts off with a wide! MS Dhoni swings and misses the next ball, before connecting, and how! The ball is spanked over long-on for six. Reddy feels the pressure and bowls another wide down the leg side and this time it runs down the fence for four. Dhoni thwacks the next ball straight down the ground for four to finish things off! What an anti-climax for the Sunrisers!

CSK win by 5 wickets with 2 balls to spare.

MS Dhoni gets down on knee and swings Dale Steyn to the deep point fence for a welcome boundary. The next ball is bludgeoned high in the air towards deep mid-wicket and gets enough on it to cross the rope for a maximum. Dale Steyn has been absolutely taken apart today! Steyn however strikes back as Ravindra Jadeja slashes at a widish delivery straight to point where Amit Mishra takes a good catch to make up for the dropped one earlier. Steyn ends with figures of one for 45.

Dwayne Bravo, who was struggling for runs having utilised 15 balls for his seven, is put out of his misery after holing out to Ashish Reddy at deep mid-wicket. Ishant Sharma finally has a wicket, and bowls an excellent last over to finish with 4-0-34-1. Chennai need 28 runs from 12 balls.

MS Dhoni carts Dale Steyn over deep mid-wicket for six first ball. The next ball is pulled again almost to the same boundary for another maximum. The world’s best fast bowler has been targeted today by the Chennai Super Kings! Fantastic stuff! Chennai need 32 runs from 18 balls.

Karan Sharma finishes an absolutely brilliant spell with a maiden over. The leg-spinner’s figures read an envious 4-0-8-0! Absolutely unbelievable in this format! Chennai need 46 runs from 24 balls.

MS Dhoni powerfully clobbers Ishant Sharma for two boundaries to take Chennai closer to their target. Those were hit with tremendous power, first to long-off and the other to deep mid-wicket. Chennai need 46 runs from 30 balls.

Suresh Raina hits Amit Mishra straight down the throat of Darren Sammy at long-on to give the Sunrisers and the leg-spinner a third wicket. Chennai need 57 runs from 36 balls.

MS Dhoni pulls hard and sends Darren Swamy to the deep mid-wicket fence for four. More brute power from Dhoni as he spanks the West Indian captain straight down the ground for another boundary.

Karan Sharma bowls a third great over for the Sunrisers, giving just two runs. He’s been quite a find, this guy! Deceptive and rather intimidating bowling action.

Suresh Raina greets Dale Steyn back into the attack with a sweet lofted straight drive for four. He middled that beautifully! It’s not often Steyn is treated like that. It gets worse for the South African as Dhoni gets the leading edge off an attempted pull and an easy catch is spilled by Amit Mishra. Dhoni is known to make you pay for such lapses.

Amit Mishra gets the big wicket of Michael Hussey! The left-handed batsman goes for the sweep, but the ball finds the back of the bat and loops up to the ‘keeper for a simple catch. End of another gem from the Hussmeister! Mishra ends up conceding just one run; can Hyderabad sneak in from here?

Ishant Sharma comes back into the attack and gives away seven runs. CSK are cruising along at this stage. Hyderabad need some wickets quick.

Michael Hussey gets a cheeky reverse-sweep past the wicketkeeper for four, before Murali Vijay gets himself stumped off Amit Mishra’s bowling. Hyderabad have their first wicket and a much-needed one at that.

Karan Sharma continues to bowl tight and concedes just two runs this time as the first Strategic Timeout is taken.

Michael Hussey steps down and hits Amit Sharma straight down the ground and into the sightscreen for six. Then, he plays the uppish sweep to a vacant deep backward square-leg for four. Twelve runs come from the over and CSK have made it through the Powerplay overs unscathed and with a healthy run-rate.

Leg-spinner Karan Sharma comes into the attack and bowls a tight over. Chennai can get just four runs from it.

Michael Hussey steps down the track and slashes at Darren Sammy’s short-pitched delivery and sends it flying to the cover boundary. Then, he pulls the West Indian off his front-foot for another boundary to deep mid-wicket. Great start, this, for Chennai.

Michael Hussey cracks a beautiful square cut off Dale Steyn to the boundary. Murali Vijay then helps a delivery drifting down the leg off his hips for another boundary.

Murali Vijay smacks Ishant Sharma straight down the ground for four to get things started for the Super Kings. Michael Hussey then swivels and pulls the Indian to the fine-leg fence for his first boundary.

Darren Sammy opens the bowling for the Sunrisers and bowls a good, tight over, giving just four runs.

Ashish Reddy smacks Dwayne Bravo between deep mid-wicket and long-on for a boundary, before getting some more power into the shot and getting half-a-dozen. Reddy then makes room and swipes Bravo through the covers for another boundary. Bravo ends with a dot ball. This is only the second time this season that the Sunrisers have gotten past 150. They will be very pleased with their score!

Ashish Reddy smacks Mohit Sharma over mid-wicket for six first ball. Shikhar Dhawan then comes in and plays a reverse-scoop over short fine-leg for four. The last ball is thwacked through the covers for another boundary. Fantastic batting from Shikhar Dhawan! Take a bow!

Dwayne Bravo dismisses his Caribbean compatriot Darren Sammy. The West Indies captain slices Bravo straight to point where Chris Morris takes a good catch. Shikhar Dhawan comes back to bat and shows Sammy how its done as he slices a low full toss wide of deep point. Dhawan gets to his half-century with a crisp cover-drive.

Darren Sammy drills Chris Morris straight down the ground for four past a darting long-on. To quote a Ravi Shastri cliche, that went like a tracer bullet. Ashish Reddy then heaves Morris over the deep mid-wicket fence for a maximum. Morris responds with a great yorker. Fifteen runs come from the over. Hyderabad need three more like this one.

Dwayne Bravo gets the wicket of Thalaivan Sargunam after the batsman skies the West Indian off an attempted pull for a simple return catch. Ashish Reddy is the new batsman. Hyderabad need some runs. They need to get as close to 140 as possible.

Ravindra Jadeja comes into tha attack rather late and is dispatched straight down the ground for six by Darren Sammy straight away.

Shikhar Dhawan goes for the swivel-pull against Dwayne Bravo, misses and gets hit on the inner thigh. After taking some treatment, he decides to retire hurt on 44 because no runner is allowed. Darren Sammy comes in and gets a top edge for four.

Jason Holder finishes his mediocre spell of 4-0-31-0 with a good over, giving away just five runs. The second Strategic Timeout is taken at the end of the over.

Shikhar Dhawan gets the reverse sweep in against Ravi Ashwin and finds the boundary. After four good balls, Dhawan lifts Ashwin over cover for four more.

Chris Morris steams in and bowls another good over, conceding just five runs. Shikhar Dhawan needs to get a few boundaries in.

Amit Mishra goes for the big slog, but only manages to sky the ball straight to Dwayne Bravo at long-on. Mishra falls for just 15 and he has consumed 21 balls. The experiment has failed. Thalaivan Sargunam, on IPL debut, is the new batsman.

Amit Mishra continues to swing the bat at anything that comes his way, but Chris Morris is too good for him. Shikhar Dhawan comes and gives some advice, probably on batting technique, to his partner. Hyderabad need to shift up a gear or two, as we take the first Strategic Timeout.

Amit Mishra tries to give Ravi Ashwin the charge but is foxed by the wrong ‘un. MS Dhoni should have completed the stumping, but misses the ball completely.

Amit Mishra gets his first boundary, albeit an unintentional one, after the ball finds the leading edge of an attempted pull and goes straight to the boundary behind the ‘keeper. Mishra then earns his runs with a proper pull through the mid-wicket region for four.

Ravichandran Ashwin comes into the attack and bowls a tidy first over, giving away only three runs. Mishra’s promotion is surprising given Hyderabad have lost three early wickets. Not sure they need a pinch-hitter at this point.

Shikhar Dhawan dances down the track to Mohit Sharma and cuts him for four past the packed off-side field. Glorious shot, that, and typical Dhawan! The left-hander then goes for th lofted drive over long-on, doesn’t connect properly but is still good enough to run along to the long-off fence. However, Sharma gets a compensatory reward after Cameron White edges him and is taken by MS Dhoni behing the sticks. And surprise, surprise! Amit Mishra is the new man in at No 4.

Shikhar Dhawan should have got his first boundary after his attempted pull takes the top edge and flies to the fine-leg fence. But the umpire calls a leg-bye! Dhawan makes sure he gets the runs to his name next time as he executes a crisp pull to the deep square-leg fence. This is followed by a whip off the hips for another boundary for the left-hander. Dhawan is up and running.

Chennai are alert and snappy as ever in the field and it’s a packed off-side there for Shikhar Dhawan’s expected slash. Just one run comes from the over.

Jason Holder goes a little wayward in his first over, conceding two wides down the leg side. On the last ball of the over, Shikhar Dhawan touched the ball towards short cover and set off for a quick single. Hanuma Vihari was in trouble straight away as Suresh Raina came running in and flung the ball at the stumps with Vihari a long way off. Unfortunate for the youngster.

Quinton de Kock takes strike to Mohit Sharma bowling around the wicket to the left-hander. De Kock plays a cracking cover drive, before trying to clear mid-of. However, Murali Vijay flies in to take the catch and send the wicketkeeper batsman packing.

Sunrisers Hyderabad captain Cameron White has won the toss against the Chennai Super Kings and has elected to bat first at the MA Chidambaram Stadium in the 34th match of the Indian Premier League (IPL).

The big news from the middle is of course the return of Shikhar Dhawan. The explosive Indian opener will be playing his first game of IPL 6 after a finger injury. Darren Sammy comes into the side, along with a certain Thalaivan Sargunam. Thisara Perera cannot play in Chennai, of course, because of the protests against Sri Lankan players. Quinton de Kock gets another game as wicketkeeper. Hyderabad believe de Kock will rise at some point in time.

Chennai are fielding an unchanged side from the one that beat Rajasthan Royals.

A very good evening to one and all, and welcome to CricketCountry’s live coverage of the match between the favourites, Chennai Super Kings, and the dark horses, Sunrisers Hyderabad.

All the talk surrounding the match is the possible return of opener Shikhar Dhawan from injury for the Sunrisers. It is bound to be a big boost for a team whose batting has failed to impress so far.

Read the preview here and feel free to leave your comments below!

Zimbabwe vs Bangladesh 2nd Test at Harare: Bangladesh reach 171/4 at tea on Day 1